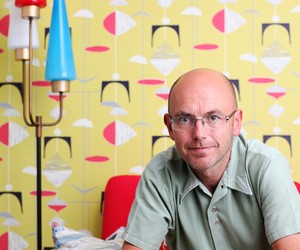 AN acclaimed UK fashion designer and entrepreneur has been revealed as the guest speaker at one of the North-east’s most prestigious business awards.

The businessman and his wife, Gerardine, built the brand to achieve global acclaim winning the prestigious British Fashion Council’s Streetstyle Designer of the Year for an unprecedented three consecutive years.

Following 21 seasons on the catwalk at London Fashion Week, the couple sold Red or Dead in a multi million pound deal.

Following this, the couple launched multi-disciplinary design agency, Hemingway Design, which specialises in affordable and social design and works with a range of high profile global brands.

The awards, organised by Enterprise North East Trust (Enterprise) and sponsored by the Royal Bank of Scotland, are in their 14th year.  More than 400 businesses and entrepreneurs from across Aberdeen and Aberdeenshire registered for the awards with only 31 securing finalist positions for the ten awards categories.

Chief executive of Enterprise, Gary McEwan, said: “The awards have traditionally attracted a number of fantastic guest speakers over the years and it is always a pleasure to welcome such an inspirational UK entrepreneur to the North-east.

“Wayne has a remarkable success story and we are delighted that he can join us for the awards. He has enthused generations of designers and I have no doubt that his tale will motivate local businesses to drive opportunity through creativity.”

Mr Hemingway said: “Businesses can, and should, do so much for communities and society as a whole and it’s important that initiatives like the Grampian Awards for Business Excellence continues to reward those that do strive to be the best and make a difference.”

Mike Fergusson, from sponsor RBS, said: “It is testament to the success and appeal of the event that we have managed to attract such a distinguished keynote speaker and entrepreneur like Red or Dead’s Wayne Hemingway who understands what it takes to become a truly successful business and brand.”

Bookings can be made on Enterprise’s website www.enetrust.com or by emailing grampianawards@enetrust.com