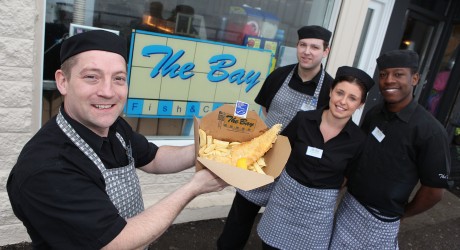 A NORTH-east award-winning fish and chip shop has been named as a finalist in a prestigious industry award in recognition of its continued commitment to safeguarding the environment.

The Bay Fish and Chips, which is the UK and Scotland’s No1 fish and chip shop is one of five finalists in the Footprint Awards in the Sustainable Sourcing Award category, and is up against some major players in the food industry.

Says a spokesperson: “The Footprint Awards celebrates the achievements of businesses in the foodservice industry for their commitment to safeguarding the environment.

The multi-award winning chipper, has received a number of accolades in other top industry and environmental awards over the last 18 months, which has helped place them in a leading position in the industry.

The Bay is a leader in promoting sustainability in the fish and chip industry and was the first fish and chip shop to receive the MSC chain of custody, giving them 100 per cent traceability of its North Sea Haddock from sea to plate.

The Bay is also amongst the most highly-rated restaurants in the UK from the Sustainable Restaurant Association (SRA).

The business has many green credentials including operating a zero waste to landfill business, recycling all waste oil to bio diesel and all food waste, coffee granules and packaging to compost in turn closing the recycling loop.

Owner of The Bay, Calum Richardson, said: “Its fantastic to be named a finalist up against some major players in the food industry.

“We strive to place the industry in a positive light so to gain this recognition means we are on the right path.

“We are focussed on our commitment to source our produce locally to reduce our food miles but also to support the local economy.”

The multi award-winning chippy has also been nominated in The Community Vote category in the same awards and is up against 12 other businesses across the UK food industry.

The Bay is urging the people of the North-east to show their support and cast their vote through the Footprint Awards website.

Votes can be placed at www.footprint-awards.com by clicking through to The Community Vote award.