Media Release: Leading manufacturing and engineering firm to recruit in 2013 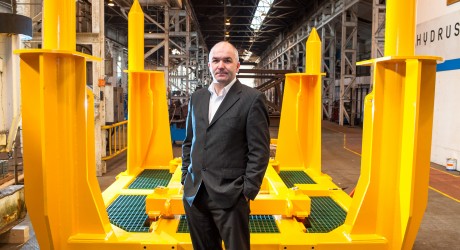 LEADING north-east of Scotland company, Hydrus, has revealed that it plans to meet increasing demand for services with a recruitment drive which will include apprentices.

Hydrus – which recorded turnover of more than £3.5 million for the year to October 2012 – offers an extensive range of expert manufacturing services and engineering solutions to the energy industries.

The company works with operators, tier one service companies, subsea original equipment manufacturers and increasingly in the renewables market.

It currently employs 35 staff and plans are in the pipeline to add a further ten people during 2013.

After a decade operating from Dyce, Aberdeen the company relocated to significantly larger 35,000 sq. ft. premises in Brechin 18 months ago, enabling the consolidation of engineering, fabrication, machining, waterjet cutting, assembly and testing, and internal and external storage on one site.

Since the move, Hydrus has experienced considerable growth including its largest ever project to date – a 60,000kg piece of equipment which was fully manufactured in Brechin and assembled on the quayside at nearby Montrose Harbour.

The project was also the first of its kind for the flourishing port, utilising a dedicated assembly area for projects and systems of this nature.

Commenting on the company’s ongoing success, Hydrus managing director, Martin F. Anderson, said: “We had reached a point where we needed more space to grow our business and, in the absence of suitable premises in Aberdeen, we decided to move to Brechin due to its excellent infrastructure, including the ever expanding deep water facilities at Montrose Harbour.

“Whilst we still have a presence in Aberdeen, the decision to move continues to pay dividends as we are now able to manufacture much larger packages of equipment in Brechin then capitalise on our excellent proximity to great road links to Aberdeen or Montrose.

“These factors mean we can fulfil the founding principles of the company which are to focus our efforts on customer service, timeliness and quality.”

John Paterson, chief executive at Montrose Port Authority, added: “The success of this quayside project was of benefit to the port, the contractor and the end customer showing that an efficient and imaginative company like Hydrus can work safely on a quayside prior to transport offshore without having to revert to roads which cannot accommodate such structures.”