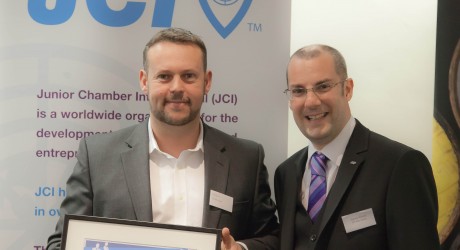 THE managing director of a North-east recycling company has been awarded in recognition of his entrepreneurial and leadership skills.

Says a spokesperson: “The award, which is open to people between the age of 18 and 40, honours and celebrates exceptional young entrepreneurs who have started a new business or created significant positive change in an existing business through innovative problem solving while adhering to the principles of Corporate Social Responsibility (CSR).

“Mr Keenan is committed to encouraging businesses to help the environment, and his organic recycling firm Keenan Recycling, which he runs with his brother Gregor, currently works with more than 500 companies and 120,000 households across the North-east and Inverness to help them to divert food waste away from landfill.”

Mr Keenan beat off strong competition from business leaders in Aberdeen, Glasgow and Edinburgh to win the accolade, and judges were impressed with his skills as a leader and his creative approach to business.

Programme manager for this year’s JCI Scotland Creative Young Entrepreneur Award (CYEA) said: “The judges were very impressed by Grant’s work, and the fact that Keenan Recycling is significantly contributing towards the one of the United Nations Millennium Development Goals to ensure environmental sustainability was also an important factor as JCI works in relationship with the UN to ensure these are achieved.

“By spotting a business opening he also helped to address a community need, and his leadership in creating a sustainable solution is one that JCI Scotland was keen to reward him for.”

Mr Keenan said: “Keenan Recycling is committed to helping the environment and encouraging businesses to work towards green targets, and winning the award means a lot to both the business and myself, and I am honoured to receive the accolade.”

The waste is used to create British Standard Industry accredited compost for farming and horticultural use.