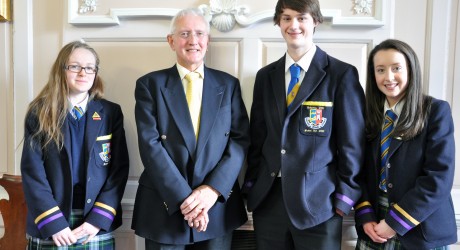 ABERDEEN pupil, Samantha Hopkins, has been awarded the top prize in a national speaking competition for pupils studying for Advanced Higher French.

Three pupils from Robert Gordon’s College entered the competition organised by the Association des Membres de l’Ordre des Palmes Académiques – Écosse (AMOPA-Écosse) for which they submitted their presentations in French to the Association’s native speaking jury.

Samantha (18) won first prize and received a French dictionary to assist in her studies. Fellow pupils Robert Kemp and Maxine Walker (both also 18 years-old and also from Aberdeen) were each presented with certificates of merit.

Professor Bennett, Emeritus Professor of French at the University of Edinburgh who represented AMOPA-Écosse commented: “The competition has grown over the last 12 months and, this year, 11 schools throughout Scotland participated in its second year of operation, entering 35 candidates.

“The standard remains very high and the evidence of the high quality of teaching and learning at Robert Gordon’s College is clearly visible.”

“They have really enjoyed the experience of working on and perfecting their submissions. This is an excellent opportunity to support classroom learning in a different environment.”

The competition articulates with the typical study and examination programme for the students and aims to support them in their preparation for their final Speaking test.