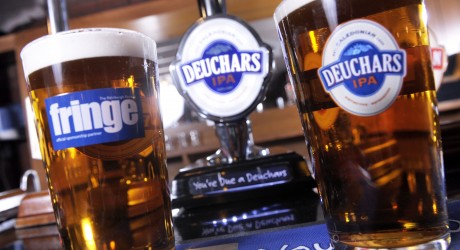 DEUCHARS IPA remains Edinburgh’s favourite after being voted the number one ale for the second year running in a consumer poll.

Brewed in Edinburgh by Caledonian Brewery, the India Pale Ale (IPA) scooped top place in a campaign organised by 30 Days of IPA – an annual celebration of the history and diversity of India Pale Ale – which took place in the capital throughout the month of April.

“Winning this competition two years in a row is brilliant news for Deuchars IPA – not just as it remains favourite in its heartland – but because there are so many great IPAs out there to compete with, from both big and small brewers.

“Brewing is our passion and to win this poll is a proud moment for us.

“We’re really pleased and we’d like to thank the voters for choosing Deuchars IPA as their number one – this adds to Deuchars IPA’s long list of awards in all sorts of competitions over the years.”

Ale lovers were able to vote for their preferred IPA in various participating pubs in the capital, including The Bailie, Ryans and The Peartree.

They could also rate their top tipple via the event’s website, which attracted over 1,000 votes from ale lovers in and around Edinburgh.

Deuchars IPA is enjoyed by the likes of author Ian Rankin, Inspector Rebus and comedian, Russell Kane. Its combination of taste and refreshment is delicious and slightly citrus, without being too bitter.

“On behalf of the team at 30 Days of IPA, we’d like to congratulate Deuchars IPA for retaining poll position.

“It’s a great result for Caledonian Brewery, particularly, as Stephen says, there are so many fantastic and distinctive ales on the market, like Ka Pai and Raj, who took second and third position.”

Deuchars recently announced a three-year partnership with the world’s biggest arts festival – the Edinburgh Festival Fringe – emphasising its roots with the capital.

The connection will see it as the ‘ale of the Fringe’, appealing to local regulars, as well as tourists from all corners of the globe. The local award-winning ale will aim to play its part in making the Fringe-goers experience one to remember.

Issued on behalf of Deuchars IPA by threebrand.

MEDIA RELEASE posted by threebrand. You too can post media releases (aka press releases) on allmediascotland.com. For more information, email here.