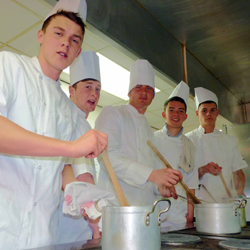 A GROUP of aspiring football stars are to be taught the skills of poaching – as well as boiling, frying and omelette-making.

Youth squad members with Aberdeen Football Club are to get a ten-week kitchen survival guide, which will start with the basics of how to cook eggs.

By the end of the culinary skills course they will each be able to prepare a nutritionally-balanced meal, as well as understand the essentials of food safety and hygiene.

The course will be led by top chefs from Sodexo Prestige, who already oversee all catering and hospitality at the football club’s home, Pittodrie Stadium.

It will brace the eight 16-20-year-olds for leaving their boarding accommodation – where meals are provided for them – and prepare them to live independently.

Allan McKimmie, education officer at Aberdeen Football Club who organised the classes, said: “The classes cover everything from boiling an egg to being safe in the kitchen so when the team finish the course, they know exactly how to prepare healthy meals safely for themselves.

“We set up the classes four years ago now as part of the youth squad’s training and it’s been a great success since. The team is given the opportunity to work in a kitchen environment and learn some fantastic cooking skills outside of their football training time.

“Teaching the team how to have a healthy diet is a crucial part of their lifestyle as it helps keep them fit and at the top of their game. If they want to become professional players, they have to start by eating correctly and stick to a well-balanced diet.”

The young team also learn how to prepare vegetables and how to handle raw meats and poultry in a safe and clean environment.

David McDonald, general manager with Sodexo Prestige at Pittodrie, the football club’s catering and hospitality partner, said: “The feedback I have received from the players so far is fantastic. They are learning so many new skills that will prepare them for the real world when they leave their accommodation.

“It can be tough moving out for the first time by yourself, so we want to teach the young men how to look after themselves and stay healthy.

“Many of the players will go on to become full time professionals either with Aberdeen or another senior club, so it is essential that they know how to cook for themselves and eat well. A good, nutritionally-balanced diet is essential to any athlete so teaching them cooking skills will help them move forward in their careers.”

After the course is complete there will be a Masterchef-style challenge which will give the players a chance to showcase their skills and demonstrate everything they will have learned over the ten week course.

Last year’s challenge involved the team preparing a three-course meal including a prawn cocktail, steak and all the trimmings followed by a fruit and ice cream dessert.

The hospitality course is supported by the Scottish Football Association as part of an ongoing education and life skills initiative to teach basic cookery skills and food hygiene to the players – in addition to their SVQ Level 3 in excellence in sport.

Aberdeen Football Club is one of 17 top class venues in Scotland – and 50 in the UK- which partner with catering and hospitality specialists, Sodexo Prestige.

Others include the national stadium at Hampden, Perth and Hamilton race courses and the Royal Botanic Garden Edinburgh. Sodexo Prestige also provides catering for The Open Championship, one of the world’s biggest golfing events.

As well as providing match day hospitality at Pittodrie, the biggest football ground in Scotland outside of Glasgow, Sodexo Prestige has helped build up a thriving business in non match day meetings and events. The nine event rooms can cater for groups from two to 400 and as well as its accessible location, it offers parking for 600 cars.

MEDIA RELEASE issued by Holyrood PR. You too can post your story ideas for journalists (aka Press or media releases), on allmediascotland.com. Email here for more information.