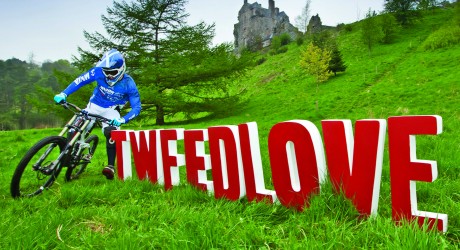 TWEEDLOVE is gearing up for its biggest year yet – as final preparations are underway for Britain’s fastest-growing bike festival.

The ten-day celebration of all things two wheeled takes place in the Tweed Valley in the Scottish Borders, with the action kicking off this Friday (May 24).

Says a spokesperson: “Now in its fourth year, TweedLove has grown from a small, local festival to one of the biggest cycling events in the UK that attracts competitors from across the globe. As a result, TweedLove is now estimated to be worth £500,000 to the local economy.

“As well as road and sell-out mountain bike races, there are also plenty of non-competitive events such as skills sessions, free ride outs and film and photography exhibitions.

“The festival’s popularity has helped cement the Scottish Borders, and the Tweed Valley in particular, as one of the world’s leading cycling destinations.”

The spokesperson added: “Cycling is a way of life in the region – Peebles Cycling Club has a waiting list of 300 local children desperate to join.

“As you’d expect from an area with such a strong cycling pedigree, the Borders has produced more than its fair share of success stories.

“But the local talent will face some serious competition this year – with the announcement that iconic bike brand, Santa Cruz, are flying in from California especially for the event. Santa Cruz has chosen the festival for the world premiere of a new film launching their latest product.

“The film was devised, shot and edited in Scotland – the first time the country has been chosen to host such a major launch.”

The film will be shown on Saturday, June 1 in Peebles and will form part of An Evening with Santa Cruz.

After the film, Santa Cruz will take part in a short question and answer session.

Sitting on the panel will be none other than Steve Peat – the most successful downhill mountain biker in the history of the sport, with over 50 world cup podiums and a world champion title to his name.

He’ll be joined by Joe Graney, head of engineering at Santa Cruz, along with Stu Thomson of Cut Media who made the film and Chris Ball, its producer.

Also at the festival will be Santa Cruz staff, including the brand’s founder Rob Roskopp, who will take part in one of TweedLove’s flagship events, the Glentress Seven.

Rob said that Scotland and TweedLove were the obvious choice for the launch: “The riding I’ve experienced in Scotland is some of the best in the world.

“From the events, to the trails, to the people who are out there riding them every day, it’s an honour to have a major Santa Cruz launch be a part of it.

“We filmed the launch video up in the West Highlands a few weeks ago, and can’t wait to share the results at TweedLove.”

And Neil Dalgleish, director and founder of TweedLove, thinks 2013 is undoubtedly their biggest event to date.

He said: “In just four years TweedLove has gone from being a small, local festival to attracting some of the biggest names in international cycling.

“Cycling really is a way of life for people here – I can’t imagine there are many other areas in the UK with such a thriving scene.

“TweedLove 2013 is our biggest and most ambitious programme to date – there are over 25 events this year.

“Especially exciting is the Santa Cruz launch – to have such an iconic team travel all the way from California to take part in the festival shows just how respected Scotland is in the international world of cycling.

“To offer local riders the chance to race against the heroes of the sport is phenomenal – it really is an once-in-a-lifetime opportunity.”

The full TweedLove 2013 programme is as follows;

POC King and Queen of the Hill Practice

POC King and Queen of the Hill race

An Evening with Santa Cruz

For more information about any of the events and how to enter, visit www.tweedlove.com.

EventScotland is working to make Scotland the perfect stage for events. By developing an exciting portfolio of sporting and cultural events EventScotland is helping to raise Scotland’s international profile and boost the economy by attracting more visitors. For further information about EventScotland, its funding programmes and latest event news visit www.EventScotland.org.

Follow EventScotland on Twitter @EventScotNews.EventScotland is part of VisitScotland, the national tourism organisation which markets Scotland as a tourism destination across the world, gives support to the tourism industry and brings sustainable tourism growth to Scotland.

Year of Natural Scotland www.visitscotland.com/natural is a campaign to showcase Scotland’s outstanding natural beauty, unique natural environment and grow tourism spend in every corner of the country. It is a partnership between the Scottish Government, VisitScotland, EventScotland and Scottish Natural Heritage

POC is a Swedish company, built on a strong mission; to do everything they possibly can to save lives and reduce consequences of accidents for gravity sports athletes by developing and renewing what personal protection is all about. POC has, in many ways, already set a new standard when it comes to technical solutions, construction, material combinations and engineering. Their clean, minimal and bright helmets, armour, clothing, goggles and sunglasses are a breath of fresh air to the market.

To find out more about POC visit http://pocsports.com

Founded in Norway in 2000, The Sweet mantra is stronger, lighter better. The companu is about integrating their uncompromising demand for quality and functionality into innovative products. Growing up with action activities in mountains, rivers and ramps, they learned how to protect themselves from the elements. Having a Sweet day, but staying safe.

MEDIA RELEASE posted by the Hillside Agency. You too can post media releases (aka press releases) on allmediascotland.com. For more information, email here.