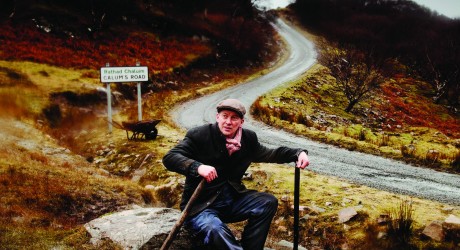 Communicado Theatre Company and the National Theatre of Scotland present

Adapted by David Harrower, from the book by Roger Hutchinson

A lyrical, musical and elegiac ensemble production. * * * *   THE GUARDIAN

The story told here is of such wisdom and significance that it sweeps objections aside, and moves many in the audience to tears.  * * * *   THE SCOTSMAN

CALUM’S Road, was a massive hit with audiences, when it toured Scotland originally in 2011, playing to sell out houses.

This year, due to popular demand, Communicado and the National Theatre of Scotland are re-mounting David Harrower’s elegiac adaptation of Roger Hutchinson’s book and the production will be back on the road for eight weeks from May to July.

Alasdair Macrae, Ian Macrae, Ceit Kearney and Angela Hardie return to recreate their original roles and will be joined by Lewis Howden and Ben Winger.

Calum’s Road tells the remarkable true story of one man’s single-minded determination to challenge the powers-that-be.

Based on Roger Hutchinson’s book of the same name, Scottish playwright, David Harrower, brings to the stage the richly detailed description of a dying way of life in northern Raasay.

Calum MacLeod, having battled the inaction of authorities on Raasay for years, sets off alone with a pick, a shovel and a wheelbarrow to build a road that will connect up the island.

His daughter has been forced to board at secondary school on Skye and now Calum wants to turn the tide of neglect and indifference and keep his family – and his community – together.

His unpaid labour of love was to dominate the last ten years of Calum’s life and leave behind a legacy – both practical and poetic – carved into the landscape he loved.

Roger Hutchinson, originally from Lancashire, now living on Raasay, is an award-winning author and journalist.

His latest book, The Silent Weaver: The Extraordinary Life and Work of Angus MacPhee was also made into a theatrical production in 2012.

David Harrower lives and writes in Glasgow. He has written several plays including Knives in Hens, Kill the Old, Torture Their Young and Blackbird which won the Critics Award for Theatre in Scotland and the Olivier Award for Best Play in 2007. Other work includes A Slow Air, which he wrote and directed for the Tron Theatre Company, which also went to the Edinburgh Festival Fringe and Good With People at the Traverse for the 2012 Edinburgh Festival Fringe a double bill with David Greig.

Calum’s Road is directed by Gerry Mulgrew. Under his artistic directorship, Communicado has presented over 30 pieces of original theatre. He has written and performed in many of the company’s productions, and directed the majority of them himself. He is also a highly acclaimed actor and joint winner, with Keith Fleming, of the Best Actor 2011 Critics’ Awards for Theatre in Scotland award for Dundee Rep and National Theatre of Scotland’s production of Peer Gynt. Recent productions include The Government Inspector and Tam O’Shanter.

Artistic director of Communicado, Gerry Mulgrew, says: “Communicado is very pleased, this year, 2013, to be celebrating its 30th birthday, and doubly pleased to be renewing our association with National Theatre of Scotland.”

Ben Winger (Alex/Young Iain) is an actor, director and sometime collaborator and has worked with theatre companies throughout Scotland. Previous productions include; The Cone Gatherers (APA), Juicy Fruits (Oran Mor/Paines Plough), Gideon and the Wooden Toppers (The Martians).