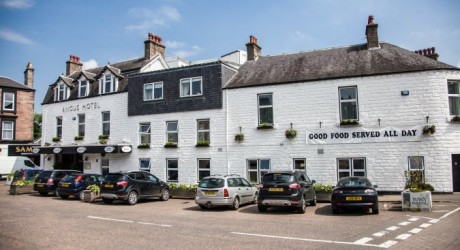 IT WAS announced today that the Angus Hotel in Blairgowrie has received the 2013 TripAdvisor® certificate of excellence award for the third year running.

Says a spokesperson: “With only ten per cent of hotels listed on TripAdvisor ever receiving this prestigious award, the accolade honours hospitality excellence and is only awarded to those establishments that consistently achieve outstanding visitor reviews on the TripAdvisor platform.

“Criteria for the award includes the volume of reviews received over the past year as well as  maintaining an overall rating of four or higher, out of a possible five by reviewers on TripAdvisor.”

“We are delighted to have been awarded a 2013 TripAdvisor certificate of excellence for the second year in a row. The whole team at the Angus Hotel always strive to maintain an excellent standard of service and this award reflects the hard work everyone puts into this.

“We are all over the moon to be recognized for this by our customers with the certificate of excellence from TripAdvisor.”

“TripAdvisor is pleased to honor exceptional businesses for consistent excellence, as reviewed by travellers on the site. The certificate of excellence award gives highly rated establishments around the world the recognition they deserve.

“From exceptional accommodations in Beijing to remarkable restaurants in Boston and family run establishments in Blairgowrie, we want to applaud these businesses for offering TripAdvisor travellers a great customer experience.”