Media Release: Performance recording could be vital for the future of viable hill sheep production 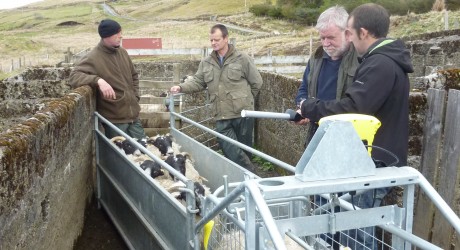 A NEW project which aims to evaluate how producers running sheep in a commercial ‘hard hill’ business can benefit from using performance recorded genetics, was announced at NSA Highland Sheep today (30th May 2013).

The initiative, announced by Rural Affairs Cabinet Secretary Richard Lochhead at the Dingwall event, is the latest step in Quality Meat Scotland’s Scottish Sheep Strategy Better Breeding Project and will evaluate the offspring of performance recorded sheep on a number of hill units on the Isle of Skye over the next two years.

“The project will be centred on four farms on the island where recorded rams were put out with the ewes last autumn so there are now offspring on the ground,” said Kathy Peebles, QMS livestock development manager.

“This part of the project is aimed at ensuring that we have viable hill sheep production, and genetics play a leading role in ensuring the survivability and profitability of the stock and the people whose livelihoods rely on the return from their animals.

“History shows that adaptability is key to survivability and we need animals that meet the needs of the food chain as well as ensuring they are hardy enough to withstand inclement weather.

“In a hill situation farmers often complain that it is too labour intensive to monitor how animals are performing so with this particular project, the farmers have been encouraged to explore how EID can be used to help track ewe and lamb performance.”

Rural Affairs Secretary, Richard Lochhead, said: “The Scottish Sheep Strategy is a great example of how the appliance of science can help to boost on-farm results.

“The evaluation project being run by QMS will give farmers the information they need to show that using performance recorded tups will yield both financial and production gains.  The focus farms have clearly shown that making use of genetic information improves the bottom line.

“This is just one example of how modern technology can help farmers to make their businesses more viable and I’d urge all farmers to embrace the opportunities that can help bring Scottish sheep farming into the 21st century.”

The project is being managed by Janette Sutherland of SAC Consulting (part of SRUC), based at Portree. Ms Sutherland said: “The trial results will provide experienced shepherds with another tool to select sheep suitable for hill conditions.”

Calum Graham of Mugeary, Portree, one of the farmers involved in the new project, said: “It’s become increasingly difficult to make any sort of viable margin on hill Blackface ewes and removing them from the hills is an obvious solution but once they are gone they are not going back.

“The use of recorded tups seems a possible solution. I wouldn’t buy a bull without viewing the EBVs for the traits I need. The last bulls bought using EBVs have proven successful.”

Feedback from Isle of Skye sheep farmers revealed that the current barriers to the use of Estimated Breeding Values (EBVs) on the island included the lack of availability of tups with EBVs for sale and lack of recording, as producers have been put off by paperwork.

The fact that a hill lambing situation does not allow for lambs to be tagged to identify their mothers was a further issue and in many cases, those who had been recording had stopped as a result of a feeling they were going it alone.

The community group will meet in August and any farmers and crofters or others from the supply trade who would like to go along to these free meetings should contact Janette Sutherland at Unit 3, 6 Leasgeary Place, Portree telephone number 01478612993 or email janette.sutherland@sac.co.uk

More information on the work of QMS’s Scottish Sheep Strategy group is available on: www.scottishsheepstrategy.org.uk