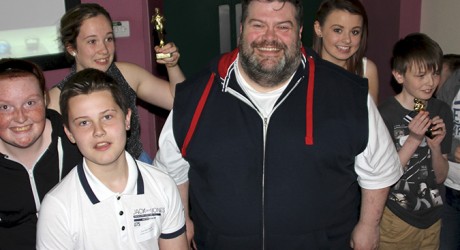 CALDERSIDE Academy in Blantyre have taken first prize in a filmmaking competition.

The award, the fourth South Lanarkshire Youth Film Festival award, was presented for its film, My Mental Health, that took a detailed look at the causes of mental illness in young people.

The film, a documentary interspersed with dramatic scenes, tackled some of the common factors that put pressure on young people’s mental health, including difficult family relationships, bullying and the pressures of celebrity culture.

Actor, Tom Urie, best known as Big Boab from BBC Scotland’s River City, presented the award to a packed crowd of around 150 at the University of the West of Scotland’s Caird Building on Thursday 23rd May.

It was the climax of this year’s film festival which has expanded its reach to work with young people from all over South Lanarkshire.

Among the other five entries were edge-of-the-seat action films featuring pirates and zombies, a psychological horror flick about a terrifying witch and an exploration of the hot talking points surrounding Scottish independence.

Emma Hawthorne, 13, of Calderside Academy accepted the award and said: “We’re so happy and would like to thank everyone who voted for our film. We had a great time making it and we’re glad you liked it.”

This year there were films produced all over South Lanarkshire. As well as Calderside, entries came from Duncanrig Secondary in East Kilbride, Lanark and Douglas Universal Connections, the Cambuslang Film Collective and Covey Befriending in Stonehouse.

The film festival is run by Voluntary Action South Lanarkshire’s Media Project, a one-stop-shop for media training and production.

Project co-ordinator, Mark Melville, said it had been a fitting end to a great year of youth filmmaking projects, and emphasised the importance of such initiatives.

He said: “The film festival programme gives young people the chance to learn new skills and tackle important issues through filmmaking. It also gives them a voice and the night was about celebrating their achievements and giving them the platform to communicate their important messages to a wider audience.”

VASLan has been delivering filmmaking programmes throughout the year, setting up film  production workshops and projects with youth organisations and schools.

These have helped to teach young people skills such as camera work and directing, putting them at the very centre of the production process.