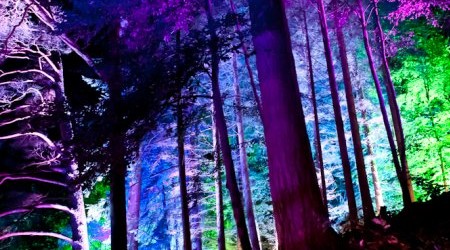 THE Enchanted Forest, one of Scotland’s premier sound and light events, has been named Best Cultural Event at this year’s regional final of the North East of Scotland’s Scottish Thistle Awards. The event will now go forward for the region to compete in the national final later this year.

Picking up three nominations, including The year of natural Scotland’s best nature based experience award and best marketing campaign categories, it was for best cultural event that the judges felt it excelled most, beating off stiff competition from Perthshire Amber.

Record-breaking visitor numbers in 2012 sealed the deal, recognising the ongoing success of the event as a major driver of tourism at a national level, as well as the event’s intermnational reach which saw TV crews attend the event from Russia, France and press coverage across the globe including Die Welt, National Geographic Traveller and other international publications.

The Scottish Thistle Awards recognise excellence in the Scottish tourism industry and aim to reward the exceptional efforts made by even more tourism businesses throughout Scotland.

VisitScotland works closely with winners to tailor make a package of benefits to best suit the winners’ needs. This could include, amongst many other options: entry into the quality assurance scheme, advertising, promotion in a VisitScotland information centre, promotion in VisitScotland PR activity.

Tickets for The Enchanted Forest 2013 are set to go on sale to the public mid-June.