Media Release: Climbing to the top of the hospitality career ladder 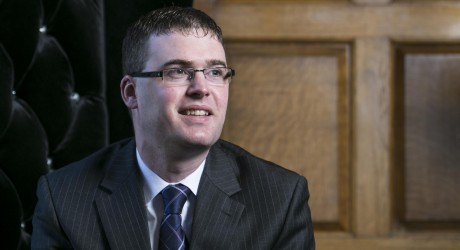 SOME people don’t know which career path they want to follow when they leave school, while others are certain from an early age.

Peter Walker, 32, who works as the general manager of Meldrum House Country Hotel and Golf Club, on the outskirts of Oldmeldrum, fell into the latter category, and he has worked in the hospitality industry since he was 15 years-old.

After leaving Kemnay Academy, Peter went onto study at Aberdeen College where he gained a HNC in Hospitality Operations and HND in Hospitality Management, and over the years he has worked as a kitchen porter, part-time barman, restaurant manager and events manager.

Prior to moving to Meldrum House Country Hotel and Golf Club, which has been shortlisted in the finals of the 2013 Grampian Awards for Business Excellence, in the Business Success Over Three Years category, he spent four years at a five-star hotel in Aberdeen, where he worked as the assistant general manager.

In 2009, Meldrum House Country Hotel and Golf Club embarked on a major refurbishment and upgrade programme to transform it from a tired three-star destination into an award winning luxurious resort, and employed a new management team.

Peter took control of the team, and although he was exceptionally young to head the major investment programme at the hotel, he wasn’t afraid of taking on the challenge

The multi-award winning complex now comprises of the original manor house hotel featuring eight luxury rooms and three stunning suites, beautifully converted stables with 13 contemporary bedrooms and conference facilities, and a luxurious lodge, which is used as a self-catering property.

The hotel upgrade also included building a luxurious marquee on-site, which has helped to make the venue a popular choice for weddings.

The beautiful grounds surrounding the hotel were also completely revamped, and include a championship 18-hole golf course.

Overseeing the growth of Meldrum House Country Hotel and Golf Club has been a huge commitment for Peter, and he has spent a lot of time away from his family to make the project a success.

“My wife, Laura and our young son, Murray, have been extremely understanding, knowing that last three years have been a critical period for my career development and our future.”

Peter said: “I have tried to build my skills across different areas of the hospitality industry with the aim of becoming a well-rounded hotel manager.

“I am proud to say that under my stewardship Meldrum House Country Hotel and Golf Club has become all we had hoped for, and I still have ambitious plans for the future of the hotel.

“Winning the Grampian Award For Business Excellence award would not only give the hotel the recognition it deserves, but it would also give staff here a real boost as they put in a tremendous amount of work to help make Meldrum House a success.”

The Grampian Awards for Business Excellence 2013, which are organised by Enterprise North East Trust (Enterprise), and sponsored by The Royal Bank of Scotland, culminates with an awards ceremony on Thursday 27 June 2013, at the Mercure Ardoe House Hotel.