Media Release: The joke’s on Shakespeare at the Gaiety in Ayr 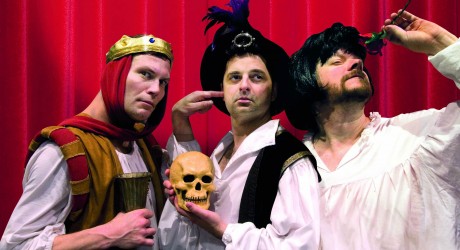 THE West End’s longest-running comedy is heading for the Gaiety Theatre in Ayr.

The Reduced Shakespeare Company present ‘The Complete Works of William Shakespeare (abridged)’ – an irreverent, fast-paced romp through all 37 of the Bard’s plays – on Wednesday June 19.

The Gaiety show is one of just three dates in Scotland on the group’s six-month UK tour.

Having clocked up nine years at the Criterion Theatre in London, the 2013 show has been revised.

Formed in 1981, this US comedy troupe take long serious subjects and reduce them to short sharp comedies. These ‘Bad Boys of Abridgement’ have created eight stage shows, two television specials, several failed TV pilots and numerous radio pieces – all of which have been performed, seen, heard and translated into Klingon the world over.

These madcap men in tights will weave their wicked way through all of Shakespeare’s comedies, histories and tragedies in one wild 97 minute ride.

The Reduced Shakespeare Company present The Complete Works of William Shakespeare (abridged) at the Gaiety Theatre, Ayr on Wednesday, June 19 at 7.30pm.

Caption: The Reduced Shakespeare Company is heading for Ayr Gaiety.

MEDIA RELEASE posted by Ayr Gaiety Theatre. You too can post media releases (aka press releases) on this site. For more information, email here.