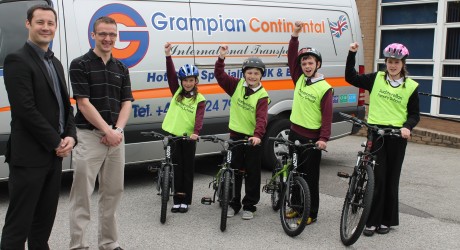 A NORTH-east haulage transport firm has assisted a local school with the transportation of new bicycles as part of the school’s new cycling scheme.

Award-winning firm, Grampian Continental, of Kinnellar, Aberdeenshire, has recently worked in partnership with Auchterellon School in Ellon to sponsor the delivery of the school’s 15 new bikes, helmets and other related equipment.

The school has recently launched a new cycling scheme to encourage a positive attitude towards cycling as a sustainable means of transport and had received funding to provide the bikes for the pupils from nursery through to primary seven.

Auchterellon School depute head teacher, Jonathan Cordiner, said: “The support we have received from Grampian Continental has been fantastic. As well as promoting a positive attitude towards cycling we aim to help children develop an understanding of other elements of cycling including the maintenance of their bicycles.”

As well as providing the school with transport for the bikes from Inverurie to Ellon, Grampian Continental also donated £150 towards a cycling event organised by the school, which went towards providing each cyclist with a bottle of water for their journey. The cycling event was a ten-mile or three miles cycle along the railway line leaving from the school and was attended by 300 pupils and parents.

“It was great to be able to transport the bikes to the children, and it was greatly received at the school. It is vital that children are encouraged towards leading a healthy lifestyle and it is great to help out where we can with this.”

Grampian Continental was launched in 2009 and was named Scotland’s European Haulier of the Year 2012 and works with a high percentage of oil and gas firms operating a varied fleet from rapid response vans to vehicles capable of moving 60 tonnes and innovative modular trailers to handle complex loads. Grampian Continental has premises in Aberdeen, Newcastle, Great Yarmouth, Verona and Ijmuiden, Holland.