Media Release: Howzat! Forty not out for Browns 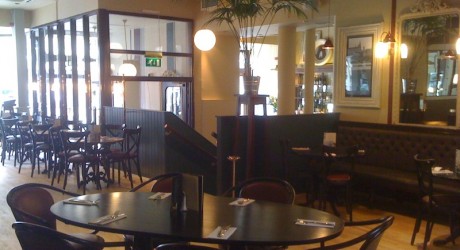 Fresh-faced 40 year-old steps back up to the crease. No sign of innings faltering for West End re-opener. Enough cricketing metaphors, say delighted diners and imbibers at today’s invitational birthday celebration

IT might be about playing the game at Browns, but it is more about the refreshment breaks, to be absolutely truthful about this fixture on the west end of George Street.

The staff might be dressed  in whites that wouldn’t be unwelcome at a test match, but their flair is all about fielding enquiries and bowling over diners and imbibers with an effortless ease that makes an undignified run up simply unnecessary.

Kept in shape, under the critical eye of general manager Tony Craig, Browns is a permanent part of the Edinburgh restaurant and bar scene. The bar and brasserie recently added its voice to the George Street Association, which represents the area’s business community.

“It’s more than a major face lift,” says Tony Craig. “It’s a statement of intent about trading on George Street. Browns as a business has been around for 40 years and, with this investment, I’m confident we’ll be here for a good many more years too.”

Edinburgh’s version of the venerable Brighton founded chain is a mere teenager, but down at the plush, Belle Epoch styled brasserie, they’re celebrating like its 1973.

Alongside the menu that’s varied enough to raise the eyebrow of even the sternest continental maître d’, there’s a fun  £19.73 menu special for two for registered regulars, easily leaving sixpence for the parking meter.

Behind the scenes, even more effort has been lavished on new kitchens.

Head chef, Fraser Lewis, isn’t thinking nostalgically, as his team see the business-end of the reworked building put to good use.  “Well, a new kitchen is just Christmas come early for a chef,” he says. “We couldn’t ask for anything more really. So many so-called refurbishments are all about front of house, but this is a sweeping improvement, right through the business.”

Stroll through the new front door and you’ll be greeted by a spread of subtle changes, opening out to a showpiece cocktail bar, perfect for refreshment before dining, or just relaxing to a live pianist, a regular feature that’s retained for the new look.

Browns has commissioned a lavish book to celebrate the decades since founding. It’s full of cocktails and recipes, nostalgia and a fun take on the Browns brand. A launch is planned for later in the year – during the Book Festival in August, but diners will be able to read between the lines before that.

“From the floor up, it’s a new Browns,” says Tony Craig.  “Now, you see more of what the location adds to a visit.  Eating out has changed a lot in 40 years, everything else has too. Browns has moved on a lot, and the book’s a good way of showing where we’ve been, where we’re going.”

There’s plenty more by way of celebration planned for the rest of the year, including inviting other high-profile 40-somethings to celebrate at Browns. Birthday parties – fortieth ones of course – are definitely being encouraged. So, dropping its petticoats and showing off a bit more, Browns has always been discrete and understated. On turning 40, it’s just found the confidence to say so.

MEDIA RELEASE posted by Simon Walton. You too can post media releases (aka press releases) on allmediascotland.com. For more information, email here.