Media Release: The race is on at North-east builders merchants 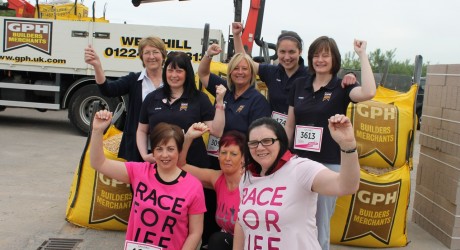 A GROUP of female employees at a local builders merchant are swapping their safety shoes for running trainers in aid of charity this month.

GPH Builders Merchants employees have teamed up with their friends to raise cash for nationwide charity, Cancer Research UK, by running the 5km race along the Beach Esplanade in Aberdeen on Sunday 30 June for this year’s Race for Life.

The team of seven women are on a mission to raise £1,000 for the worthy cause and have been training to prepare themselves for the race of their lives.

The Race for Life has been running since 1994 and has seen more than six million women come together for the popular event to help raise more than £493 million for Cancer Research UK.

GPH Timer sales advisor, Sarah Sharp, put the team together after a few of the ladies in the office began dieting in time for the summer.

Sarah said: “We are all getting really excited for the race and have been training and getting ourselves geared up in time for it.

“Each of us has been touched by cancer in some way or another so the cause means a lot to us. We have received great support from the team at GPH and we are just really excited for the day.”

Sales and marketing director for GPH, Nikki Mortimer, said: “It is great to see the ladies of GPH come together for such a great event and to really see them work hard for it.

“The girls have been able to get suppliers and customers to support them which is great and they are well on their way to hitting their target.

“There really is a great sense of team effort for the race.”

If you wish to show your support for the GPH team at this year’s Race for Life you can make a donation online: www.raceforlifesponsorme.org/gph-girls