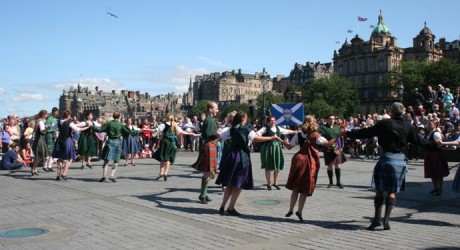 Now in its 22nd edition, this biennial festival includes performers from Belgium, Lithuania, Slovakia and Scotland in 2013. This is an exciting opportunity to compare and contrast the Scottish and Flemish bagpipes, the Lithuanian zither and the Slovakian cymbal and of course the couple dances, set dances, and solo dances from the four countries.

All performances take place 21-27 July and many are free though some require admission fees to the venue such as Falkland and Stirling palaces and the theatre shows.

“A feature of the Festival we particularly enjoy, is the opportunity for the group participants to learn each other’s dances and join in social activities as well as performing. We also very much appreciate how people in Edinburgh welcome the participants by hosting them in their homes so there is a lot of cultural exchange and fun throughout the week,” said Rosalie Wilkie, chair, Dunedin Dancers.

The two organising dance groups – Dunedin Dancers and New Scotland – cover the full range of Scottish dance styles: country dance, ceilidh, highland and hard shoe step with accompanying variety of Scottish music and instruments such as the fiddle, accordion and bagpipes. They welcome two returning groups – Dophei from Belgium, who first performed in 1973, and Rasa, from Lithuania, who first visited Scotland in 1991. The young dancers in HÁJ from Slovakia, will be taking part in the festival for the first time.

* Parade from village at 2pm (free)

Performance in National Museum of Scotland,

More information about the groups involved:

Founded in 1962, Dophei perform traditional Flemish dances from the Campine Region of northern Belgium. These dances originated through rural life over many years for example, celebrating the harvest, or a wedding. Dophei wear traditional handmade costumes – the men often in blue smocks and red neck scarves, the women wearing beautiful shawls, with either a handmade white lace cap for special occasions, or a red polka-dot headscarf for everyday wear. In their repertoire they also have medieval Flemish flag waving and a dramatic dance with sticks. Their dances are accompanied by traditional music played by several instruments, including Flemish bagpipes and accordions. Dophei means ‘heather’ in Flemish, which is an appropriate name for a group who will be visiting our festival in Scotland for the seventh time – the first time being in 1973. We have participated in their home festival many times. Website: www.dophei.be

Rasa first came to our festival in 1991 and enchanted us with a mix of lively energetic group dances, whirling couple dances, and dances with slower more subtle movements. All their dances emphasise the individual steps and are based on traditional Lithuanian folk dances. Rasa’s beautiful handmade costumes include “tartan” skirts, embroidered aprons and colourful woven sashes for the women, with the men wearing long elegant tailored jackets. They dance to a fascinating variety of unique Lithuanian instruments, such as the kanklés (a type of zither), as well as the accordion, violin, double bass and clarinet. Some of their dances are also accompanied by haunting songs. Rasa was founded in 1967, making it one of the first folk dance groups in the country. It is based in Kaunas, the second city of Lithuania, where we visited them in 1992. They also took part in our festival in 2007, so this will be their third visit. Website: www.rasa.lkka.lt

This young Slovakian group will soon set your feet tapping with their fast, infectious rhythmic stamping, clapping and whistling, firmly in the Eastern Europe tradition. Their energetic dances come from the eastern half of Slovakia, and include dancing over bottles (maybe less dangerous than swords!) and a stick dance similar to a Northumbrian rapper dance. They perform a wide range of dances, some with men or women only and many in couples. Their costumes feature a hat with feathers for the men, while both men and women wear embroidered shirts, embroidered waistcoats and high boots. Accompanying music is played on violins, double bass, accordions and a dulcimer (known as a cymbal). Háj was founded in 1975 and this is their first visit to Scotland. Their name means “grove” in Slovakian. Website: www.fshaj.sk

Dunedin Dancers was set up initially over 40 years ago to organise an International Folk Dance Festival every two years. Over time they have grown to include a regular weekly get together to dance, perform demonstrations and run other social activities, based in Edinburgh. They have also been part of the Tattoo dance team when Scottish Country Dancing was on the programme. Their dancing repertoire consists mainly of country dances in the traditional sets of three and four couples, but they also perform Highland Dancing, Scottish Step dancing (hard shoe) and ceilidh sets. The complexity of the performances lies mostly in the dance figures to the two different tempos in Scottish country dancing: fast (reels, jigs, and hornpipes) and slow (strathspeys). Music for their dancing is provided by accordion, fiddle and pipes. Website: www.dunedindancers.org.uk

Founded as a student society 60 years ago, New Scotland continues its close relationship with Dunedin dancers as the graduate group it set up to run a regular International Folk Dance festival. It offers regular weekly classes in Scottish Country Dancing, Highland, Ceilidh and Scottish Step dancing mainly for students at the University, though non-students are also welcome. New Scotland are organising the annual UK Intervarsity Folk Dance Festival (IVFDF2014) which brings student folk dance societies and their members together on an annual basis for a weekend of workshops, performances and fun!. Similar to Dunedin Dancers, New Scotland frequently perform in Folk Dance Festivals across Europe. The two groups often collaborate to send groups of dancers to these events and perform demonstrations locally. And of course, they combine their efforts to present the Dunedin International Folk Dance Festival experiences to the people of Scotland. Website: www.newscotland.org.uk

MEDIA RELEASE posted by the TMSA. You too can post media releases (aka press releases) on allmediascotland.com. For more information, email here.