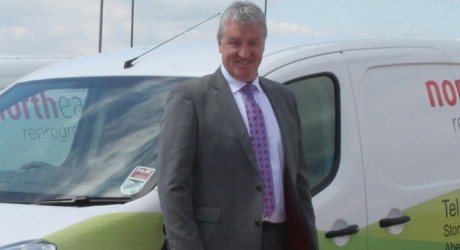 A LEADING Scottish reprographics firm has recently secured a contract worth in excess of £1million with a major oil and gas company.

North East Reprographics (NER) based at Marywell, on the outskirts of Aberdeen, recently won the large contract, which along with several other contract wins has put the group on track for its overall growth target for the year.

The retained contract includes a fully-managed print service throughout the oil company’s site, as well as on-site reprographics support and as a result will create new jobs on site.

The digital print provider, which has gone from strength to strength since they underwent a strategic merge earlier this year with industry leader Xeretec, has also opened new offices and showroom premises in Glasgow and Edinburgh due to continued growth and business in new markets as well as several other contract wins.

NER group managing director, John Sheran, said: “Retaining this contract is testament to the high level of service given by our on site staff and the members of team on our helpdesk in Aberdeen.

“This contract added to our new office premises in Glasgow and Edinburgh has helped to support our expansion and growth plans, further strengthening our position as one of the leading managed print service providers across Scotland and the UK.”

Launched in 1995, NER, which supplies Xerox machines and services including printers and copiers throughout the UK and Europe, now has 80 employees covering the whole of Scotland and caters for hundreds of local businesses and global organisations.

The firm has been operating in the North-east for over 17 years and has strong links with all business sectors in Scotland and the North-east, including numerous oil and gas organisations, with a reputation for service excellence, bolstered by an established help desk facility in Aberdeen.

To find out more about NER services and their Xerox range contact 01224 784422 or visit www.nerepro.co.uk