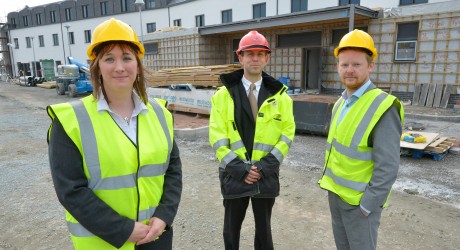 A MILESTONE in the development of The Moorfield Hotel on Shetland was marked this week with a topping out ceremony at the site in Brae.

Building work on the 100-bedroom property started on 20 August 2012 and is due for completion in July, with the hotel scheduled to open in August. Using modular off-site construction, the hotel rooms were manufactured and furnished in Warrenpoint, near Belfast, and shipped to Shetland in March for assembly on site.

The new hotel will be used primarily to accommodate workers at the Shetland Gas Plant at Sullom Voe. It will have a 100 per cent guaranteed occupancy rate in its first year as part of an agreement with energy firm TOTAL.

And with the completion date in the diary, recruitment is progressing well at the hotel. Most of the senior members of staff are in place along with guest service assistants, the catering team and housekeepers. However, there are still vacancies and interviews are ongoing in order that the complete team of 43 full-time employees is in place for opening.

Ailsa Sangster, general manager of the hotel, said: “There has been a great response to employment opportunities at The Moorfield Hotel by local Shetland residents who have shown real interest and enthusiasm for working in a brand new hotel.

“The hotel has offered employment opportunities for the north of Shetland and the islands of Unst, Yell and Whalsay where locals might previously have had to travel to Lerwick to secure employment.”

Ross Morrow, of BDL Shetland, the developer behind the project, visited Brae for the topping out ceremony. He said: “This marks an incredibly important milestone for The Moorfield Hotel so I was delighted to be on site to celebrate the hard work of everyone involved.”

MEDIA RELEASE posted by CM Porter Novelli. You too can post media releases (aka press releases) on this site. For more information, email here.