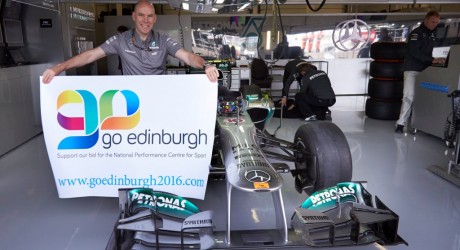 EDINBURGH’S bid to host the proposed National Sports Performance Centre revved up today when it was endorsed by one of Formula 1’s most highly-rated technical engineers and Heriot-Watt University graduate, Jock Clear.

He graduated with a mechanical engineering degree from Heriot-Watt University in 1987 before going on to forge his F1 career.

Jock took time out from preparation for the Grand Prix to endorse Edinburgh’s bid to be the location of a new National Performance Centre for Sport (NPCS), saying: “Sport is fast becoming a science; F1 is a technical sport and has always rewarded those with the technical edge, and in the modern era this is now true of every sport.

“Where better to place the centre than alongside the country’s foremost science and technology university?

“There is a recognition now that elite performance in our athletes requires huge commitment, and that this delivers great rewards to sport at every level.

“The positive impact of sporting success translates into how we use our schools, parks and playgrounds to build up a sporting nation.

“I believe a centre devoted to sports performance sits nowhere better than in the capital city, and the planned facility at Heriot-Watt will also allow for long-term expansion and development.

“We have to look ahead to where we want to be in ten or 20 years, and give this great initiative room to grow.”

Heriot-Watt’s bid, partnered by the City of Edinburgh Council, is one of three shortlisted for the NPCS, intended to provide Scotland’s top sports men and women with the facilities, programmes and services that will enable them to prepare to excel on the international stage.

A decision on the successful bidder is expected later in the summer with the new Centre scheduled to open in 2016.

Heriot-Watt’s bid provides an easily accessible site situated in the capital city of Scotland with good transport links to the rest of the country and the UK. The university already has a strong sports science programme and close links to community clubs, as well as a number of national organisations including Scottish Squash and Racketball.

Heriot-Watt principal, Professor Steve Chapman, said: “Our desire is to create a world-class sporting facility that will have a positive impact on the preparation of our athletes, readying them to compete successfully on the world stage.”