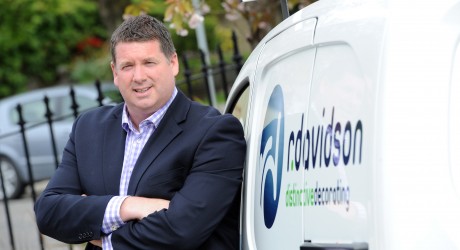 AN award-winning Royal Deeside painting and decorating firm has won a contract worth £80,000, to assist with the refurbishment of a prestigious hotel in Aberdeen’s west end.

R Davidson Painter & Decorator, which is based in Banchory, will be responsible for painting and decorating 49 bedrooms, along with the hallways and communal areas at The Chester Hotel on Queens Road, which was formerly known as Simpson’s Hotel.

The major refurbishment programme at the prestigious hotel, which is expected to be complete in early 2014, will include the addition of 14 luxury guestrooms, and a new restaurant and lounge bar, along with the construction of a large function room to cater for large conferences, corporate dinners, and weddings for up to 180 guests.

The painting and decorating firm is currently working on several large contracts in the Aberdeen area including a 16,000 sq ft serviced office development on Union Street, and a number of high profile residential developments in and around the city.

Managing director of R Davidson, Trevor Mutch, said: “We are very proud to be involved in the refurbishment of such a prestigious and iconic local building.

“Projects on older buildings such as this always come with a few surprises so this gives us an opportunity to prove the abilities of our workforce on another high profile job and provide valuable industry experience for the team.”

Established in 1930, R Davidson is one of the North-east’s longest established home improvement and contractors. The firm, which recently won the prestigious Best Trader Business (with 11+ employees) at the Trades Awards, employs 75 full-time members of staff, and specialises in delivering bespoke painting, decorating and ames taping services for the private domestic and commercial markets.

MEDIA RELEASE posted by Frasermedia. You too can posted media releases (aka press releases) on allmediascotland.com. For more information, email here.