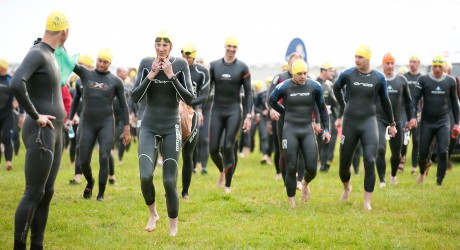 A RECORD 420 competitors will test their nerve, stamina and strength in Highland Perthshire next Saturday [13th July 2013] in their attempt to swim across Loch Tay, conquer seven Munros, kayak seven miles and cycle 34 miles to the finish line.

Billed as ‘Scotland’s toughest one-day endurance challenge’, the Artemis Great Kindrochit Quadrathlon is set to raise in excess of £250,000 for charity and Perthshire-born round-the-world cyclist, adventurer and broadcaster, Mark Beaumont, will be among those taking part.

Now in its 13th year, the Artemis Great Kindrochit Quadrathlon is supporting two nominated charities, Mercy Corps’ work to improve the lives of those living in the city slums in Indonesia and Mary’s Meals work to feed 755,000 children in schools around the world.

Perthshire organisers, WildFox Events, whose outdoor adventure challenges have helped raise over £20million for charities over the last 13 years, say funds raised at this year’s Quadrathlon with match funding, will take the total raised for Mercy Corps to over £6million.

WildFox Events managing director, David Fox-Pitt, said: “With match funding from the European Commission we hope to raise in excess of £850,000.

“To date, The Artemis Great Kindrochit Quadrathlon has raised £6million, bringing hope to 14.5 million people in the world’s poorest countries.

“This is a staggering amount of money and we are thrilled that thanks to the record turnout, this year’s event will make an even bigger difference to those living in poverty.”

260 people took part in last year’s Quadrathlon, which was won by ‘Gypsy Kings,’ a team comprising Rupert and Peter Davenport who completed the course in 10 hours and 2 minutes.

The clock stops ticking when competitors cycle over the finish line and chop a giant watermelon in two with a large sword.

The Quadrathlon starts at 0600 hrs on Saturday from Ardtalnaig shore on the South shore of Loch Tay, with most competitors expected to finish in around 14 hours. For more information, visit www.artemisgreatkindrochit.com

The Artemis Charitable Foundation is an independent charitable trust set up and funded by Artemis Investment Management LLP (‘Artemis’). Independent and owner-managed, Artemis opened for business in 1997. Its aim was outstanding investment performance and client service. All Artemis’ fund managers still share these two precepts – and the same flair and enthusiasm for fund management. The business has grown to the extent that it now manages an asset base of some £15bn. This is spread across a range of unit trusts, an investment trust, hedge fund products, a venture capital trust and both pooled and segregate institutional portfolios. The Artemis philosophy requires its fund managers to invest in Artemis funds. This means that the fund managers’ interests are directly aligned with investors.

Mercy Corps. A global humanitarian charity with European headquarters in Edinburgh. Mercy Corps saves and improves lives in the world’s toughest places, reaching more than 19 million people each year. This year’s Quadrathlon will fund a Mercy Corps project that will improve the lives of urban slum dwellers in Indonesia. Mary’s Meals. This Scottish charity provides a daily meal in a place of learning for 755,777 desperately hungry in 16 countries across Africa, South America and Eastern Europe at an average cost of £10.70 per child per year. For more information about the global movement, visit www.marysmeals.org.uk