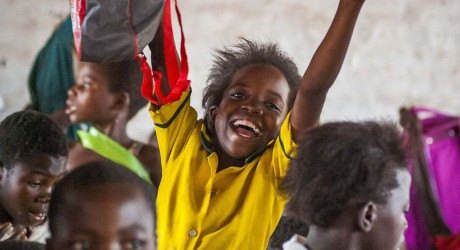 YOUNGSTERS in some of the poorest parts of the world are being fed and given equipment they need for school, thanks to pupils at Paisley’s Kibble Education and Care Centre.

The Kibble pupils launched a fundraising campaign backing Mary’s Meal’s – the charity that provides food and basic school equipment for children in Africa.

As part of the charity’s Backpack Project, kind-hearted Kibble pupils filled 80 backpacks with a variety of items from notepads, pens, pencils, erasers and rulers to soap, toothbrushes, toothpaste and clothes.

A total of £500 was also donated to Mary’s Meals after a series of fundraising events and some of the pupils even handed over their pocket money to the charity effort.

Daniel Adams, head of Fundraising at Mary’s Meals, said: “We are extremely grateful to the young people attending Kibble Education and Care Centre for supporting the children who receive Mary’s Meals.

“Most of the children who benefit from Mary’s Meals have suffered war, poverty, famine, or natural disaster. The daily meal we provide in schools is often what has attracted them to the classroom for the very first time, but once there, they also have to contend with a lack of basic resources like pencils or notebooks.

“That’s why we started the Backpack Project. A simple backpack filled with basic educational items, together with Mary’s Meals, can help impoverished children in the developing world make the most of their education and seek an escape from poverty.

“The young people at Kibble may have had challenging upbringings themselves, but I find it very inspiring that, through their efforts for Mary’s Meals, they have all taken positive steps to help children less fortunate than themselves.

“On behalf of the children we feed, I want to thank them very much.”

Begins a spokesperson: “Mary’s Meals currently provides 757,777 children with a daily meal in their place of education.

“The charity’s Backpack Project complements the feeding programme by providing children with basic educational resources to help them make the most of school. Since the project began in 2005, over 300,000 backpacks have been delivered to children in Malawi, Liberia and Kenya.”

Kibble’s chief executive, Graham Bell, said: “We try to instil a keen sense of community and charity in the young people at Kibble.

“Not only will children in some of the poorest parts of the world benefit from the fundraising of the young people at Kibble, but our pupils here in Paisley will get something out of it as well.

“And that is the knowledge that their efforts will make a positive difference to the lives of children who are much worse off than they are.

“It’s a fantastic lesson they will take into their adulthood.”