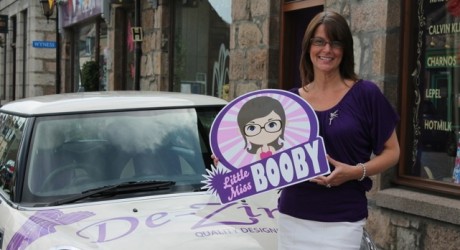 AN Inverurie-based lingerie boutique has embarked on a new mission to help educate young girls in the North-east on getting the right fitting underwear.

De-Zire lingerie boutique has launched its new campaign, Little Miss Booby, to coincide with the launch of its new range to add to its existing array of exclusive brands at the boutique.

Says a spokesperson: “The new campaign, which aims to highlight the importance of young girls wearing correctly-fitting lingerie, and educate them about looking after their breasts, kicks off this summer with the introduction of the new brand, Banana Moon Intimates, available from early August.

“Studies have shown that more than 85 per cent of women in the UK are wearing ill-fitting lingerie, which works out that every four out of five are not getting the support they require from a wardrobe staple.

“Wearing badly-fitting lingerie can cause many health issues, with irreversible ligament damage at the top of the risk list as well as headaches, stomach upsets and back and shoulder issues.”

The brand, which is youthful, funky and pattered aims to target parents and children prior to the new school term in August, and fittings are available in the boutique.

Boutique owner, Susan Evans, said: “My main objective for the Little Miss Booby campaign is to educate not just the girls themselves but the parents.

“It is very easy to pick up a bra from high street retailers and even supermarkets these days, however many are fashion bras which have under wiring and this is not good for young breasts as they are tender and the wiring can hinder the development of the glands.

“It is crucial that breasts are given the best fit and support from the early stages.

The new range is due to hit the De-Zire boutique in early August and De-Zire will be offering free fittings and consultations.

De-Zire stock many exclusive brands of lingerie and offer fitting that don’t involve the dreaded tape measure. Boutique owner Susan Evans is a qualified bra fitter and has a team of trained staff on hand with their expert eye to make sure customers are fitted to the highest possible standard.