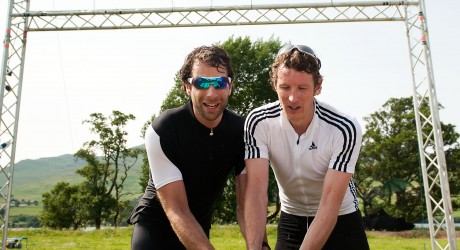 SCOTTISH adventurer and round-the-world cyclist, Mark Beaumont, and former rugby captain, Rob Wainwright, were among 384 people who competed in one of Scotland’s toughest one day endurance events, at the weekend, with the aim of raising almost £850,000 (with match funding) for charity.
A record number of people turned out to compete in the Artemis Great Kindrochit Quadrathlon, in which participants swim to the North shore of Loch Tay, run or walk seven Munros, kayak seven miles and cycle 34 miles to the finish line.
Mark Beaumont and his teammate, Bruce Duncan, completed the course in the fastest time, in just 8 hours and 37 minutes.
Says a spokesperson: “The Artemis Great Kindrochit supports two charities: Mercy Corps’ work to improve the lives of those living in the city slums in Indonesia; and Mary’s Meals work to feed 755,000 children in schools around the world.
“Since the event was launched 13 years ago by Perthshire–based outdoor adventure challenges company WildFox Events, almost £6 million has been raised for charity.WildFox Events’ managing director, David Fox-Pitt, said: “£250,000 has been raised from today’s event and with match funding from the European Commission, this comes to a staggering £850,000!

“This has only been made possible due to the dedication of those that took part, the generosity and encouragement of their supporters, and of course the many volunteers who have helped make this event such a success.”

1.   WildFox Events Ltd is based in Kindrochit in Loch Tay, Scotland. The business was founded in 1999 and to date has helped raise over £20million for charities, both here in the UK and in the world’s poorest countries. In 2012, over 2000 people participated in six adventure challenges covering a distance of around 120,000 miles and raising £1million for charities including: ABF The Soldiers’ Charity, Alzheimer Scotland, Asthma UK, Maggie’s Cancer Caring Centres, Mary’s Meals, Mercy Corps, NSPCC, Oxfam, Prince’s Scotland Youth Business Trust (PSYBT) and Water Aid.

3.   The Artemis Charitable Foundation is an independent charitable trust set up and funded by Artemis Investment Management LLP (‘Artemis’). Independent and owner-managed, Artemis opened for business in 1997. Its aim was outstanding investment performance and client service. All Artemis’ fund managers still share these two precepts – and the same flair and enthusiasm for fund management. The business has grown to the extent that it now manages an asset base of some £15bn. This is spread across a range of unit trusts, an investment trust, hedge fund products, a venture capital trust and both pooled and segregate institutional portfolios. The Artemis philosophy requires its fund managers to invest in Artemis funds. This means that the fund managers’ interests are directly aligned with investors.

4.   Mercy Corps. A global humanitarian charity with European headquarters in Edinburgh. Mercy Corps saves and improves lives in the world’s toughest places, reaching more than 19 million people each year. This year’s Quadrathlon will fund a Mercy Corps project that will improve the lives of urban slum dwellers in Indonesia.

5.   Mary’s Meals. This Scottish charity provides a daily meal in a place of learning for 755,777 desperately hungry in 16 countries across Africa, South America and Eastern Europe at an average cost of £10.70 per child per year. For more information about the global movement, visit www.marysmeals.org.uk