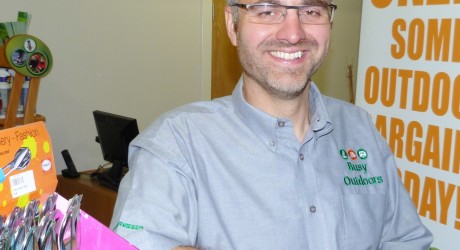 A FOLDING camper, which recently featured on ‘The Apprentice’, is to make a special appearance in Kinellar, Aberdeenshire, this weekend, when it will be demonstrated at local outdoor leisure company, Busy Outdoors, for its first trip to Scotland.

‘The Opus’, which was launched earlier this year, was made famous last month (12th June 2013) after appearing on the hit TV show, when two teams of budding entrepreneurs chose to sell it as part of a task on the show.

The folding camper is the star attraction at Busy Outdoors’ Open Weekend, which will be used as a fundraiser for Aberdeen charity, Transition Extreme.

Funds raised will go towards its ‘Summer Project’ to provide opportunities for children living in areas of deprivation. Alongside ‘The Opus’, other attractions over the weekend include: a dry car wash, face painting, refreshments, special offers and a raffle.

Managing director of Busy Outdoors, Chris Cooper, comments:  “We’re really excited to be showcasing ‘The Opus’ this weekend. The TV show has already drawn lots of attention to it, so it will be great for people to see the product in real life and learn more about it.

“It’s also good that we can use the event to support a local charity that will provide new opportunities for children living in areas of deprivation.”

The Opus has been designed specifically to make camping easy for holidaymakers across the UK.

Weighing in at 700kg and folding down to 1.17 metres, the folding camper is easy to tow and quick to set up, taking little time to transform from a trailer into a large comfortable living space with top-of-the-range fixtures and fittings. Once folded down, it provides space to carry bikes, boats and other adventure toys.

MEDIA RELEASE posted by Limetree Consultancy. You too can post media releases (aka press releases) on allmediascotland.com. For more information, email here.