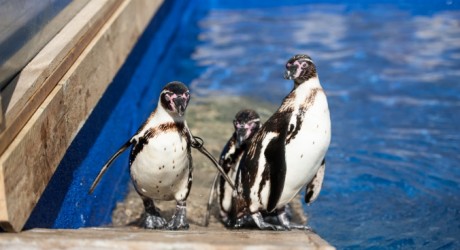 IN a nationwide competition to name the four female Humboldt penguins at St Andrews Aquarium, the p-p-p-people of Scotland have spoken loudly, with Andy Murray-themed names coming top of the league.

The number two player in the world, originally from Dunblane in Scotland, soared to Wimbledon victory earlier this month and his success has clearly made an impact.

Now, four female Humboldt penguins are about to be christened Andy, after the champ, and the three women who have been ever-present in supporting Andy’s career success: mum Judy, girlfriend Kim and grandmother, Shirley.

“It was a tough decision to pick a winner out of literally hundreds of suggestions, but one theme kept coming through strongly in a lot of the entries. We had lots of Andy’s, Murrays and Wimbles but, because the penguins are girls, we had to be a little more creative.

“One of the entrants, Elspeth Badger from Perthshire, picked out the names of Andy’s girlfriend and mum and we added in his granny to the mix. It’s a p-p-p-perfect tribute to Andy’s success and he’s welcome to come and visit his namesakes any time he’s in town.”

The winner, Elspeth Badger, will now be the first member of the public to adopt a penguin from St Andrews Aquarium, and will be served up adoption certificate Number 1, which will hopefully bode well for Andy Murray’s current bid to become the number one tennis player in the world.

“Haha we love it. We do great penguin impressions. U can find them on you tube!!”

“I can’t help saying it – this news is ‘ace’! I’m really excited about my suggestions being chosen and about being the first adopter of the St Andrews Aquarium penguins.

“I was actually in Dunblane watching Andy Murray win the Wimbledon match and it was an amazing experience to be there when the home crowd roared to celebrate his victory. I can’t wait to visit Andy, Judy, Kim and Shirley the penguins to say hello.”

The Humboldts arrived from the Seaview Wildlife Encounter on the Isle of Wight at the end of May, and have already attracted large crowds since their arrival.

Their enclosure has a viewing platform where you can see the penguins swimming underwater, as well as underwater viewing windows, a feature that is unique to St Andrews Aquarium.