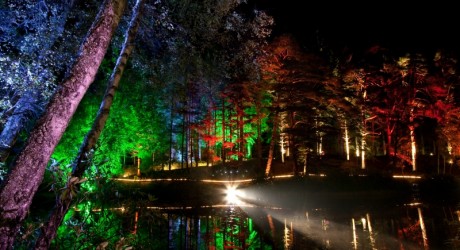 THE Enchanted Forest, one of Scotland’s premier sound and light shows, has been shortlisted for two titles in this year’s prestigious Scottish Event Awards, which will see it battling out for its place at the top against some of Scotland’s most popular events.

This year the event will compete for the titles of Scotland’s Best Cultural Event and Best Large Event and organisers are hoping for a reprise of their success in 2011 when the event was also shortlisted for the same two titles.

That year they took home a commendation for Best Large Event, the trophy for Best Cultural Event and beat off stiff competition from all the other category winners to take the title of Event Management Grand Prix, firmly cementing the show as one of Scotland’s top events.

Founded in 2002 with just 3,000 visitors attending in its first year, the event now attracts more than ten times that number of visitors with almost 31,000 visiting the 2012 show in its tenth anniversary year.

The Perthshire event has become a mainstay of Scotland’s tourism calendar and tickets for this year’s show are already selling faster than ever before, leading organisers predict yet another record breaking year.

Derek Allan, producer of The Enchanted Forest, said: “This is excellent news and we’re delighted to be shortlisted in both categories.

“Highland Perthshire Community Interest Company has always pushed the boundaries with this event and it’s rewarding to see that the hard work and commitment of a small rural community can compete head to head with our city centre counterparts in both quality, scale of event and creativity.

“Every year we set and break our own records, but we never rest on our laurels. It is this passionate dedication to making The Enchanted Forest even better every year that is the magical ingredient to the event’s success and being shortlisted for such prestigious awards is testimony to the talent we have in the team, from the stewards to the designers, from the lighting engineers to the box office staff.”

The winners will be announced at a glittering awards ceremony due to take place in Glasgow on Thursday 26th September.

MEDIA RELEASE posted by Volpa. You too can posted media releases (aka press releases) on allmediascotland.com. For more information, email here.