Media Release: Family put their pedal power to good use 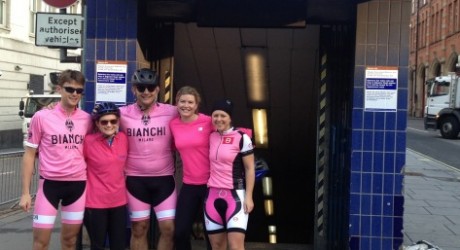 A GROUP of friends have pedalled their way to fundraising success by raising over £30,000 for an Aberdeen-based charity.

The group of cyclists, made up of husband and wife team, Camilla and William Tamworth and two of their friends, Luka Gakic and Valerie Gordon, cycled nearly 300 miles in three days in a bid to raise money for local charity Newton Dee, based in Bieldside.

The fundraisers set off on their bikes in the last weekend in May and travelled from London Paddington to Padstow in Cornwall, with stopovers in Shaftesbury and Crediton, Devon, to allow the team to rest. In order to start the donations off, the group promised to match the first 25 people to give £100, and if they hit the original target of £10,000, they vowed to complete the ride wearing pink clothing.

Camilla and the group first decided to do the fundraising challenge last year as William’s cousin, James, is a resident at Newton Dee. The charity, which offers supported accommodation for adults with special and complex needs, provides an environment where the residents can enjoy an independent home life whilst maintaining a daily working life with responsibilities.

Camilla said: “We are overwhelmed by the generosity everyone has shown to us from the very beginning of our fundraising efforts.

“We never thought we would be able to raise this much, so we are very grateful to everyone who has donated, especially to those who donated after seeing us on route.

“Although the challenge was tough, it has been really rewarding as we have managed to raise a fantastic amount for Newton Dee.

“James has lived at Newton Dee for four years and is very happy there. We wanted to show our support as a thank you for all the help they have given him.”

The group first began their training in January, practising every weekend and holding trial runs – even in the unpredictable British weather. The final stage of the fundraising campaign saw Camilla successfully completing an Olympic distance triathlon. This included a 1.5km swim, a 45km bike ride and a 10km run to finish.

Senior co-worker at Newton Dee, Jacob Vollrath, said: “Everyone at Newton Dee is thrilled by the efforts of Camilla and her team. It is a great achievement and they have raised a tremendous amount of money, which will be put to good use in the village.

“Without the support from members of the public, Newton Dee wouldn’t be able to provide our residents with the support they require so Camilla and her team should be very proud of themselves for accomplishing the tough bike ride and the triathlon.”

Newton Dee is home to more than 80 residents, who live and work on site with supervision, and an additional 30 adults with special needs who join the workshops on site during the week. There is an on-site coffee and gift shop, grocery store, bakery and toyshop, which are open to the public to help continually raise funds for the facility.

If you would like to donate, the group’s just giving page is still open. Please visit www.justgiving.com/ptpip.

Issued by Frasermedia Ltd on behalf of Newton Dee.