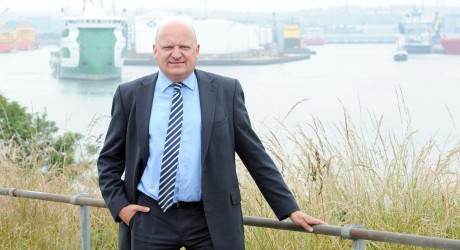 NORSEA Group, one of Norway’s leading suppliers of base services and integrated logistics systems to the oil and gas industry, has appointed Kim Christensen as its first UK general manager to lead the group’s future developments in Scotland.

He will head up NorSea Group (UK) Ltd, a new company within the Group, which has been established to reinforce the Group’s commitment to enhance its business activity in the UK.

To support this, NorSea Group will open its first UK office in Aberdeen.

The move follows NorSea Group’s recent announcements that it had signed an agreement with the Scrabster Harbour Trust in Caithness and formed a strategic working partnership with local logistics firm Hugh Simpson (Contractors) Ltd to develop Scotland’s most northerly mainland port as an one-stop supply base servicing the oil and gas industry.

Mr Christensen’s initial focus will be to build on the existing Scrabster relationships and to move proposals forward to establish a base which will particularly benefit offshore operators and developments in the northern North Sea and East/West of Shetland.

He will do this through working closely with the local community to maximise benefits for the area.

Alongside that, he will be responsible for identifying new business opportunities in the UKCS with an emphasis on North-East Scotland right up the coast to Orkney and Shetland.

“NorSea Group (UK) Ltd anticipates expanding operations in Scotland by establishing a presence in additional strategic ports within the next two years.

“Many of the Norwegian companies we work with already have existing relationships with companies operating in the UK North Sea sector so there is already a good fit there,” says Knut Magne Johannessen, director of international and project operations in NorSea Group.

Mr Christensen, a Dane who has lived in the UK for 21 years, has more than 20 years of shorebase and logistics experience.

Prior to taking up his appointment with NorSea Group on August 1, he was CEO of Danbor Ltd’s Aberdeen-based UK activity where his role included establishing a new shore base for the company at Montrose.

He said he was looking forward to increasing NorSea Group’s presence in Scotland.

“The company currently operates nine supply bases along the coast of Norway which provide logistics support to companies operating offshore on the Norwegian continental shelf.

“The development at Scrabster Harbour will benefit from that expertise as it grows to meet the demands of the oil and gas, renewables and decommissioning sectors in North Scotland. That level of experience will be equally as relevant in the other opportunities we will be exploring.”

As the most northerly port on the Scottish mainland Scrabster is ideally placed to service offshore activity West of Shetland and in the northern North Sea.

Its geographical location cuts down transit time to the nearest mainland port, giving a fast ‘burn and turn’ turnaround.

As is a privately-owned company founded in 1965. The group is a leading supplier of base services and integrated logistics systems to the Norwegian oil and gas industry. Annual turnover is approximately NOK 2.5 billion. NorSea Group AS has its headquarters in Tananger outside Stavanger, and has proprietary interests in nine supply bases along the Norwegian coast.

In addition, the group is an active promoter of the progressive development of Risavika as the region’s most important logistics hub. Main shareholders are Wilh. Wilhelmsen Holding ASA, Eidesvik Eiendomsinvest AS and Simon Møkster Eiendom AS.