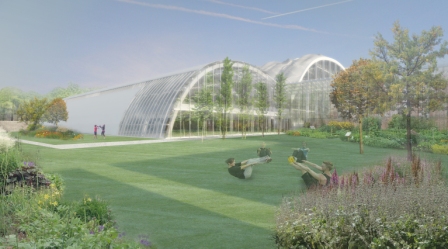 DETAILS of Edinburgh’s bid for the National Performance Centre for Sport (NPCS) were announced today (Thursday 8 August) following the bid team’s presentation to the judging panel at the national stadium, Hampden Park.

Heriot-Watt University in partnership with the City of Edinburgh Council outlined a wide-ranging bid which features an iconic design concept by top Scottish architects, Reiach & Hall.

A key feature of the design is the centre’s roof, which is inspired by the angle and trajectory of what is recognised as one of the greatest goals in football history – Brazil’s Roberto Carlos’ goal against France in 1997.

Edinburgh’s bid would see the NPCS built in the parkland setting of Heriot-Watt University’s extensive campus in the west of the city; it features a Hampden replica pitch; an outdoor synthetic pitch; four outdoor natural football and two rugby pitches; nine court sports hall; a 3G indoor football pitch and a fitness suite, and world-class facilities for sports science and medicine all linked together by a spectacular sports promenade.

The design has been developed ‘around the athlete’, providing world-class sporting facilities and services that will have a positive impact on the preparation and development of athletes, coaches and volunteers.

The site’s excellent transport links providing easy access to the city, Edinburgh Airport and the wider surrounding area, are also a key feature of Edinburgh’s bid.

It was also revealed that Edinburgh’s bid for the NPCS has successfully secured a commitment from Scottish Rugby which has chosen the capital as its preferred location for a training base for Scottish and Edinburgh rugby.

The NPCS would also accommodate the Scotland team during the Autumn Tests and Six Nations.

At the presentation Heriot-Watt University and the Council also underlined the strong support enjoyed by the Edinburgh bid with over 4,000 pledges of support from the public, city sports clubs, neighbouring local authorities and businesses – including Edinburgh Airport.

Speaking about the Edinburgh bid, Heriot-Watt University Principal, Professor Steve Chapman said: “We are creating a sporting centre of excellence for the benefit of all of Scotland.

“Our bid’s innovative and iconic design offers a world class National Performance Centre for Sport that will deliver an excellent sporting environment where athletes will feel empowered to excel.

“Our vision matches the ambition of Scotland to compete and be recognised at the highest levels of sporting competition nationally and worldwide.”

Councillor Richard Lewis, the city’s Culture and Sport Convener said: “This is an exciting stage in the bid process where we are able to reveal to the world what exactly is being proposed at the Heriot-Watt campus.

“The bid team has created a spectacular concept for the facility, which has the potential to put the Capital at the forefront of performance sports in Scotland.

“This would also bring overwhelming benefits for sport in the city, significantly adding to Edinburgh’s sporting infrastructure and allowing us to build on the legacy of the Olympics and the Commonwealth Games.

“We will now all be waiting in anticipation to hear the Scottish Government’s decision.”

Dominic McKay, Scottish Rugby director of commercial operations, communications and public affairs, said: “Scottish Rugby is extremely keen to see improved sports facilities being provided as part of the National Performance Centre for Sport project and while each bid has its own individual merits and whichever bid is successful would be good for sport in Scotland, we believe that basing the facility at Heriot-Watt University would be the closest fit with our requirements.

“The facilities already provided at the university and those being proposed bring a great strength to the Edinburgh bid.

“Also critically important is the proximity of the Edinburgh campus to Murrayfield, Edinburgh Airport and the domestic transport network that would be beneficial to our players, coaches and staff.

“There’s also considerable potential for Scottish Rugby to become involved with academic and other programmes run by the university and we’d be delighted to work with them on this.

“We’ve been extremely impressed with Edinburgh’s bid team and their enthusiasm and desire to bring such world-class sporting facilities to Edinburgh.”

Organisers urged people to help them bring the National Performance Centre for Sport home to Edinburgh by backing the bid at www.goedinburgh2016.com.

The preferred bidder for the NPCS project is expected to be announced in early September. Dundee and Stirling have also been shortlisted.