Media Release: Derby Hotels Collection acquire 100 per cent of capital of their hotels in Paris and London 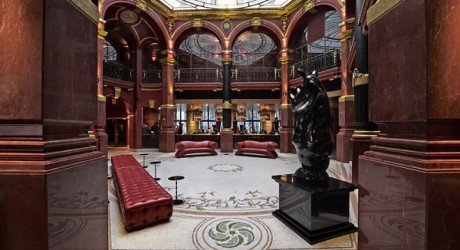 DERBY Hotels Collection and the Metrópolis group reached an agreement by which Derby has acquired the group’s 50 per cent share in Hotel Banke in Paris and The Caesar in London and now holds 100 per cent of the capital.

Between the two hotels, the operation is worth a total of 120 million Euros.

Begins a spokesperson: “Thanks to the sale, Metrópolis can focus on the office segment and continue to build, directly or indirectly through its subsidiary Metroinvest, an equity portfolio of buildings as important as those in Barcelona and Madrid, which already includes assets in London, Paris, Hamburg, Dusseldorf and Berlin. Grupo Metrópolis operates under property director, Pere Bosch, and chair, Juan Manuel Soler (former president of ESADE).

“Derby Hotels Collection, with a total of 20 establishments in operation under chair, Jordi Clos, including their flagship hotels in Spain, the Claris in Barcelona and the Urban in Madrid, consolidate outright ownership of these two emblematic hotels in London and Paris.”

Founded in 1968, Derby Hotels Collection is one of the most prestigious hotel companies in Spain. Its hotels are unique and original, combining art, culture and luxury. Each hotel contains a unique collection of ancient and modern works of art. They are all different and unrepeatable, providing a new and surprising experience.

At present, the company has 20 luxury hotels in Barcelona, Madrid, London and Paris.

The company has an exciting future ahead!