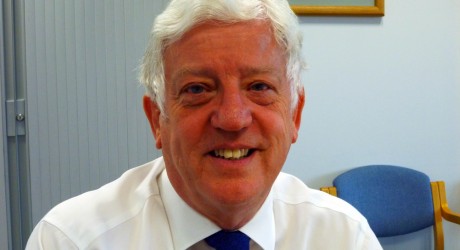 A LEADING freshwater scientist has been recognised for his contribution to the University of the Highlands and Islands.

Philip Boon, an expert in rivers and lochs, has been made an honorary Professor by the institution.

Professor Boon, who is head of the Ecosystems and Biodiversity Unit at Scottish Natural Heritage in Edinburgh, was awarded the title for his extensive knowledge and experience and his work with the Rivers and Lochs Institute at Inverness College UHI.

He has sat on the Institute’s advisory committee since it was formed in July 2012.

Originally from Ewell in Surrey, Professor Boon has had a long career in freshwater science. After graduating with a PhD in freshwater ecology from the University of Newcastle upon Tyne in 1976, he held various positions in academia, including a research post at the Polytechnic of the South Bank in London and a lecturing role at the University of the West Indies in Jamaica.

He also founded the scientific journal, Aquatic Conservation: Marine and Freshwater Ecosystems (which he continues to edit) and has written and contributed to numerous academic papers and books.

Speaking about his award, Professor Boon said: “I am delighted to receive this honour from the University of the Highlands and Islands. The university is ideally situated to develop a programme of freshwater teaching and research in the region and I am looking forward to finding ways to contribute.”

She explained: “Professor Boon played a significant role in the development of the newly established Rivers and Lochs Institute and his position at Scottish Natural Heritage and depth of experience is extremely relevant to its aims and objectives.

“He is keen to foster the development of freshwater research in the Highlands and Islands and will no doubt continue to make an important contribution to the future of the Institute as well as the promotion of freshwater science in the university and region.”

University of the Highlands and Islands’ principal and vice-chancellor, James Fraser, commented: “This award is a fitting way to recognise Professor Boon’s expertise in and dedication to freshwater science as well as his work with the Rivers and Loch Institute.

“There are many water related opportunities for the university partnership so we are delighted to receive input from such a respected professional and hope we can develop further collaborations with him in future.”