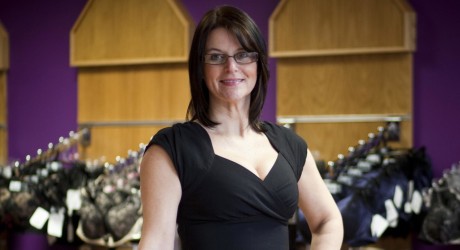 ONE of the last remaining lingerie boutiques in the Aberdeen area has been given a boost after receiving two nominations in top industry awards for the second year running.

Inverurie-based De-Zire has been shortlisted at this year’s Stars: Underlines Best Shop Awards in the Best Personal Touch and Best Reference Shop categories.

The independent retail awards, which are in its fifth year, recognise excellence in intimate apparel, swimwear and legwear retailing in the UK.

The lingerie boutique, which was launched in 2008 by North-east businesswoman and ‘lingerie queen’, Susan Evans, has been exclusively supplying the area with luxurious lingerie brands for over five years, leading to a strong and loyal client base within the city.

Since opening the boutique, the family run business has been dedicated to providing outstanding customer service, which has been recognised by her suppliers who nominated the shop for the awards.

Owner of De-Zire, Susan Evans, said: “I am thrilled that De-Zire has been shortlisted at the awards for the second time in a row.

“It’s a huge boost for my team and I, as De-Zire prides itself on creating an atmosphere where customers are truly comfortable so they can enjoy their time in the boutique.

“To be recognised by our suppliers is an accolade in itself, as it means they have acknowledged the lengths I have gone to as I try to offer the North-east a truly different shopping experience.”

De-Zire is working tirelessly to change woman’s attitude towards lingerie shopping and Susan, who is a qualified bra fitter, has a team of trained staff on hand to make sure every customers is educated and fitted to the highest possible standard.

She has also recently launched a campaign, ‘Little Miss Booby’, with the aim to teach young girls in the North-east about the importance of correct fitting underwear.

The awards, which are organised by Underlines magazine, cover the whole of UK and Ireland lingerie shops, and have a judging panel of 24 leading lingerie brands that nominate and select winners. Finalists will be announced in October, and the award ceremony will take place on Wednesday 20 November in London.

De-Zire stock many exclusive brands including, Aubade, Lejaby, and maternity range HOTmilk. To book your appointment, please call the boutique on 01467 670 835.