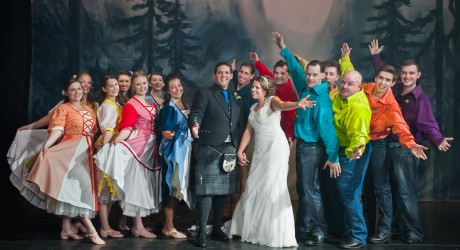 Where else could a bride and groom end up on stage during their wedding day?

Their wedding happened to fall at the same time as Starlight Musical Theatre’s matinee performance of Seven Brides for Seven Brothers, Mhairi’s favourite musical. After the ceremony, the bride and groom were invited on stage with the cast for a photo opportunity which will surely stand out in their wedding album.

Neil and Mhairi were married in the Provost Smith Memorial Chapel in the Bishops Palace, the original part of Eden Court.

They also had a very special guest during the ceremony. Their ring bearer was their wee westie dog called Brucie.

After their meal, they welcomed some more evening guests and partied along to BIRO (Black Isle Rock Orchestra) into the small hours of the morning.

Claire Wardrop, conference and events manager, said: “It all worked in perfectly. In an earlier wedding meeting Mhairi had mentioned her favourite musical was Seven Brides For Seven Brothers, so I hoped we could arrange something with the cast.

“Starlight were fantastic and suggested bringing Mhairi and Neil onto stage during the show interval.

“Wedding photographer, Chris, from the Highland Photo Gallery, was all for it too and now Neil and Mhairi have this brilliant keepsake of the day. I just love this picture!’