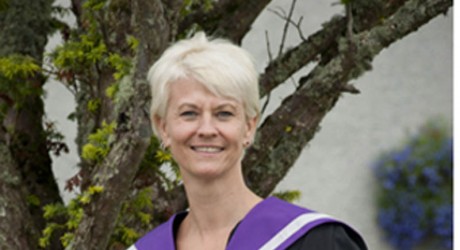 A MOTHER of two who worked hard to achieve excellent academic results has been named as the Lews Castle College UHI Student of the Year.

Andrea Wallner has just completed an honours degree in energy engineering through the University of the Highlands and Islands. The 48 year-old single mother was praised for successfully juggling the demands of bringing up two children with full time study to gain exemplary grades.

Despite her busy schedule, she volunteered for the role to represent students around the college and organised social events to bring them together.

Andrea, who is originally from Germany but now lives in Stornoway, was presented with her Student of the Year certificate and a cheque for £150 at the Lews Castle College UHI graduation ceremony on Friday (23 August).

She will now go forward as a candidate for the overall University of the Highlands and Islands Student of the Year award.

Now she has completed her degree, Andrea hopes to find a job where she can use her learning to help secure energy supplies to meet growing demands.

Speaking about her award, Andrea said: “I never thought I was doing anything to deserve this award. I just thought it would be nice if all the students could have more fun together and it was nice to be able to initiate things that will make student lives more exciting.

“I had a lifelong passion for Scotland so when I got the chance to move to here, I took it.

“When I got the opportunity to study renewable energy (another of my passions) at Lews Castle College UHI I almost felt that it must have been my destiny. In Germany, I would never have dreamed of starting something new, but here it just felt right.”

David Green, former principal of Lews Castle College UHI, was also recognised at the graduation. He was awarded an honorary fellowship for his commitment to the college and services to the University of the Highlands and Islands.

Presenting David with the fellowship, university principal and vice-chancellor James Fraser said: “This is a fitting way to recognise someone who played a major role in creating the University of the Highlands and Islands and gave up much of his time to do so.

“He saw this work as completely complementary to his job as principal of Lews Castle College and shared the vision of a university where students could attend through their local college, helping to break the tradition of students leaving their communities for higher education.”

Speaking about his award, David Green said: “This is an honour that means a great deal to me.

“The creation of the university was one of the most important, complex and challenging achievements in Scotland’s recent history and its significance and impact will grow over the coming decades.

“I was fortunate to be principal of Lews Castle College for 15 very exciting years and am delighted to be invited to receive this honour at the graduation ceremony that for me has always been the most important day of the year.”

He said: “Andrea has approached her various roles within the college with an enthusiasm which has been refreshing and infectious.

“Her award of a first class honours degree clearly shows her academic ability and her willingness to work hard. That she also found the time to undertake her busy student leadership role showed a commitment to the needs of others which was, and is, inspirational.

“It has been a privilege to work with Andrea in my first year as principal and she has set a very high standard for those who follow in her footsteps.

“I have worked closely with David over the past twelve years in college activities and I am delighted that his commitment to the University of the Highlands and Islands has been recognised in this way.

“David’s commitment to the cause has been huge, much of it undertaken behind the scenes and unseen by many. David has played a significant role in the establishment of the university and thoroughly deserves to be recognised for his efforts.”

University of the Highlands and Islands · Education and training ·