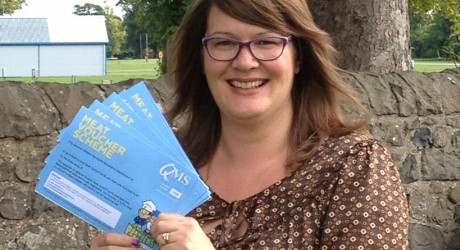 The scheme, which is again being rolled out Scotland-wide, offers vouchers worth up to £100 to secondary schools to exchange for top quality meat such as Scotch Beef, Scotch Lamb and Specially Selected Pork at local retailers.

Developed in response to concerns that tight budgets mean many Scottish schools are unable to afford fresh, red meat products for cookery lessons, the scheme is a key component in QMS’s health and education work to ensure young people understand the role of red meat in a healthy, balanced diet.

Says a spokesperson: “This week’s launch follows figures from a recent Mori poll, conducted for BBC Scotland, which reported more than half of Scots rely on ready meals or takeaways at least three times a week and fewer than one-third (27 per cent) of people of working age cook for themselves every night.”

Jennifer Robertson, a registered dietitian and QMS’s Health and Education Coordinator, said: “These poll results emphasise the need to educate Scottish secondary school pupils, who are the consumers of the future, on the range of ingredients available to them as well as showing them how to cook simple, nutritious meals that need not cost the earth.

“Lean red meat not only tastes good, but is a great source of protein, b-vitamins, iron and zinc. With more than a third of Scotland’s young people lacking in iron, red meat is an essential part of a healthy, balanced diet.”

Home Economics teachers across Scotland should apply for their voucher before 1 December 2013. The vouchers are worth up to £100, depending on the number of pupils on the school roll, and are valid until 1 February 2014. Vouchers can be redeemed at independent retailers and butchers.

Jennifer Robertson continued: “Over 290 secondary schools took part in the initiative last year, an increase of 20 per cent from 2012, and the feedback from schools has been fantastic.”

Home economics teachers can apply for their voucher via the QMS website: www.qmscotland.co.uk by clicking on ‘Health and Education’.

MEDIA RELEASE posted by QMS. You too can post media releases (aka press releases). For more information, email us, here.