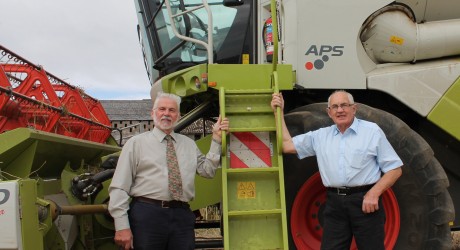 A LEADING North-east organics recycling company is giving famers a helping hand as they prepare their land for winter crops.

Says a spokesperson: “As fertiliser prices rise, the benefits of using compost become even clearer, and Keenan Recycling, based at New Deer in Aberdeenshire, offers farmers a cost-effective solution with its BSI PAS100 agricultural compost.”

The specialist organics company currently produces around 30,000 tonnes of the specialist compost per annum, and has delivered over 250,000 tonnes to farmers in the area since production began in 2004.

Chair of Keenan Recycling, Mel Keenan, said: “Using published statistics, Keenan Recycling calculates that the use of 30,000 tonnes of compost annually by our agricultural customers can result in a collective saving of nearly £500,000 in bagged fertiliser and liming costs every year, as well as maintaining and improving the fertility of the land they farm.

“The composting operation also provides environmental benefits as it does not produce methane gas unlike waste tipped into landfill sites.”

July, August and early September are traditionally busy months in the farming calendar as crops are harvested and farmers prepare their land for planting winter cereals.

It can also result in the production of stronger crops which have been found to eliminate competing weeds such as sterile brome in winter barley.

Keenan Recycling currently supplies 70 farming customers with the premium compost, including Davie Smith of Cloffrickford Farm, Auchnagatt, who has been using the product for seven years.

Mr Smith said: “The compost is highly beneficial and invaluable to the farm. I have definitely seen a marked improvement in the fertility of my land together with improved yields and a reduction in bagged fertiliser costs.”

Organic recycling firm, Keenan Recycling currently processes in excess of 50,000 tonnes of organic waste per year at the award-winning £5m facility, collecting food waste from more than 500 businesses across the region.

The company collects food waste from as far south as Stonehaven to Tain in the north.