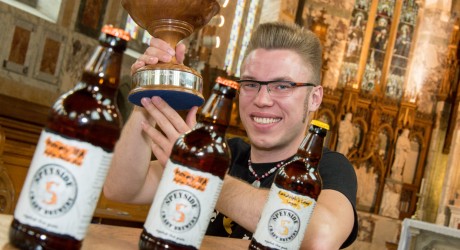 The 27 year-old founder of The Speyside Craft Brewery in Forres was announced as the regional winner at a ceremony at Blairs Museum & Chapel in Aberdeenshire today. He was presented with a £1,000 cash prize by Campbell Urquhart, managing director of The Urquhart Partnership Ltd, who attended on behalf of the Aberdeen Business Club, sponsors of this year’s award.

Seb Jones has been making beer since he was 13 and established The Speyside Craft Brewery in 2012.

Last year, thanks to a loan from PTYBS and other investors, he was finally able to turn his dreams into reality and with the opening of the Speyside Craft Brewery.

The Speyside Craft Brewery is a new and modern brewery. The beers are made using the finest ingredients and the same water that produces some of Scotland’s best-known whiskies.

As well as supplying pubs, restaurants, hotels and independents throughout Inverness and Morayshire, the brewery is already making good distribution headway into the central belt and England where a distribution contract has been established with a company taking casks as far south as Cambridge.

A collaborative venture has also been initiated with two large Speyside distilleries to identify product development and joint marketing opportunities.

With an existing range of three cask bottled beers and a fourth one about to be launched imminently, business is flourishing and Seb Jones says he is confident that production and turnover at the Speyside Craft Brewery will double by the year end.

Commenting Seb Jones said: “Having the backing of the Prince’s Trust so early was a major boost to getting my business plan going. It gave the business credibility and helped open doors to other types of support from agencies such as Business Gateway, Moray Council and HIE, and meant I could invest in specialised training.

“This is the first time this award has been won by a Moray business for more than eight years, so I’m particularly pleased to be able to shine the light on what this area has to offer to young people who want to start their own business and what the Prince’s Trust can do for young entrepreneurs.

“Any success the brewery enjoys however, is in large part down to the support we get from our customers and members of the local license trade.”

The runner up is 26 year-old Chris Minchin, founder of CDM Lettings, based in Aberdeen.

CDM Lettings began life as a partnership in April 2011 with assistance from PTYBS and Business Gateway.

Earlier this year, Chris took over the ownership of the business and thanks to clever marketing and use of social media techniques the business is growing steadily.

CDM Lettings now has over 70 properties on its books and the young entrepreneur is now looking at expanding into property investment next year. Mr Minchin was presented with a £500 cash prize and a runners-up certificate.

Speaking at the awards ceremony, Prince’s Trust Youth Business Scotland regional manager, Samantha Leys said: “Both these young entrepreneurs have exemplified determination, the will to succeed and the ability to turn a good idea into a viable business. They are great role models for other young people and deserving winners of these awards.”

Campbell Urquhart, of Aberdeen Business Club, added: “We are delighted to celebrate the determination and innovation of our young people by recognising and rewarding their achievements through these awards.”

About The Prince’s Trust