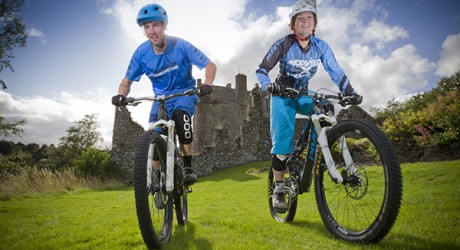 SCOTLAND has been chosen to host a major new international cycling event in 2014.

The Enduro World Series, a new global mountain bike race series, will visit the Tweed Valley in Scotland this May as part of the TweedLove cycling festival. It is the first time the UK has been awarded a round of the series, which this year has visited Whistler in Canada, Val d’Isere in France, Colorado in the United States and will conclude in the Italian Riviera next month.

In 2014, Tweedlove will also feature in the Homecoming Scotland programme as a celebration of the country’s active pursuits and strong cycling heritage.

Funding will build on support from EventScotland’s National Programme and will create opportunities to add to the extensive festival events programme.

Currently enjoying its first season of racing, the Enduro World Series links the planet’s largest mountain bike enduro events with the best trails and mountain bike communities across the globe.

TweedLove, the two week cycling festival in the Scottish Borders, will host the first ever UK round of the series, which in 2014 will also travel to a further five countries.

Now in its fifth year, TweedLove has grown from a long weekend featuring a few races to the UK’s biggest cycling event with over 30 events taking place over two weeks.

And as well as bringing some of the most famous names in mountain biking to Scotland, TweedLove also generates a healthy boost to the local economy.

This year alone, the festival was credited with bringing in over £700,000 to the Tweed Valley – and with the inclusion of the Enduro World Series race next year that figure is expected to jump to £1.2 million.

Says a spokesperson: “Enduro mountain biking is a hybrid of the cross-country and downhill disciplines and is designed to push both the physical and technical abilities of competitors to the limit. Following a similar format to WRC rally car racing, enduro races feature special stages along with non-timed liaison stages.

“What separates the Enduro World Series from most other top level sporting events is that the sport’s best athletes compete alongside amateur racers. At the first event in Italy 350 enthusiasts got to ride alongside no less than 16 former and current cycling world champions.”

Neil Dalgleish, director of TweedLove, said: “We couldn’t be more excited that TweedLove is bringing the Enduro World Series to Scotland – it will be one of biggest cycling events the country has ever seen.

“The Enduro World Series has proven itself to be an incredible race format that attracts the best mountain bikers from across the world and we are delighted that Scotland has been chosen to host the first event in the UK.

“I doubt you could devise a more effective way of putting Scotland and the Tweed Valley on the international ‘must visit’ list for mountain biking. This puts us up there with the likes of Whistler in Canada, and the top places for trails in Europe. It’s the perfect stamp of approval of how good the riding is here. It’s world class.

“We look forward to offering a warm Scottish welcome and the best Borders hospitality. And what better time to welcome them than during Homecoming Scotland 2014?”

Paul Bush OBE, chief operating officer of Event Scotland added: “TweedLove has grown year on year to become one of Scotland’s best celebrations of cycling. Set in the spectacular Tweed Valley the festival really highlights why Scotland is the perfect stage for events. As part of Homecoming Scotland 2014, TweedLove will showcase Scotland’s active pursuits, and will provide visitors with a number of exciting ways to get involved with the sport.”

Chris Ball is the Edinburgh-based managing director of the Enduro World Series, who said: “The plan was always to bring The Enduro World Series to the UK as the sport has a huge following in this country. We are delighted to award a round to Scotland and to TweedLove as both are synonymous with world class cycling.”

MEDIA RELEASE posted by Hillside Agency. You too can post media releases (aka press releases) here. For more information, email us.