Media Release: ‘Out of this world’ new advertising campaign from Border Biscuits 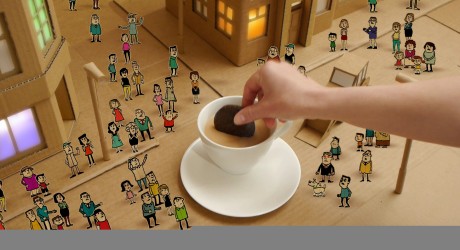 BORDER Biscuits will be hitting our screens with a creative new advertising campaign, to be aired today – September 2 – produced by Oscar-winning Ink Films and voiced by Jane Horrocks.

Running on STV, Channel 4, Channel 5, Daybreak and online throughout September, the 30-second ad explores the one-dimensional world of boring biscuits and shows exactly how picking a brilliant biscuit from Border Biscuits can literally rock your world!

With the familiar tones of Jane Horrocks to voice the campaign, the commercial highlights that Border Biscuits are not ‘bloomin’ boring’ and hard to resist, especially the dunking of delicious flavours like toffee apple crumbles and dark chocolate gingers.

Capturing this, Horrocks states: “I like a little dunk, me!”

Written by leading Scottish advertising agency, The Leith Agency, the commercial was produced by Dundee-based Ink Films, who won an Oscar for their animated film, ‘The Illusionist’, and was based on research amongst regular biscuit-eaters.

David Reid, marketing director, Border Biscuits said: “Our customers are always telling us how much they love our biscuits and particularly the unusual flavours and ingredients that go into perfecting a Border Biscuit.

“We wanted the advertising campaign to bring to life the fact that Border Biscuits are anything but boring. It’s a light hearted look at the one-dimensional world of boring biscuits, highlighting what might happen if everyone picked a brilliant biscuit, not a boring one.”

The first ad will air during Coronation Street’s centre break on STV at 20.45 on Monday September 2.

Lanark-based Border Biscuits is an independent owned family run business and was founded in 1984. With a turnover of £11.5 million, the company employs 150 people.

There are 32 different varieties in the Border Biscuits family. From the best-selling legendary dark chocolate ginger, to traditional flavours like Viennese Whirls and utterly delicious and genuinely different flavour combinations including toffee apple crumbles, there’s a Border Biscuit to suit everyone.

MEDIA RELEASE posted by Smarts. You too can post media releases (aka press releases) on allmediascotland.com. For more information, email here.