Media Release: Restoration work to restore the Eddleston Water will restrict flooding to Peebles in the coming years 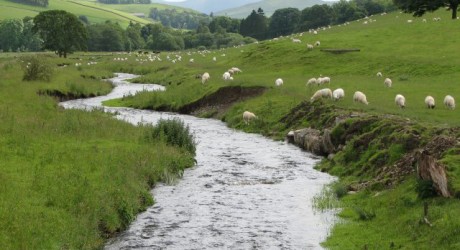 THE scheme which will reduce flood risk to Eddleston and Peebles and restore natural habitats officially launched on the 20th of August 2013 with an one-day conference at Cringletie House Hotel in Peebles.

Over the period of 200 years, long sections of the river, which joins the River Tweed at Peebles were straightened to improve agricultural production in the area.

Damage to the river caused environmental changes and a higher risk of flooding in the area affecting a number of local businesses.

Government Minsiter, Paul Wheelhouse, visited the location to see the work taking place on the Eddleston and was shown important alterations planned for the coming months.

Scientists from Dundee University, the British Geological Survey and the Tweed Foundation will continue to monitor the river and expect significant improvement to the river habitat.

“The scheme to improve Eddleston Water was implemented in the Cringletie grounds at the bottom of our drive and will bring great improvement to the area. Flooding can cause enormous issues to local businesses and we want to make sure that visitors enjoy and appreciate the area for many years to come.”

The work has been funded by a number of bodies, including Scottish Government, SEPA and the Water Environment Fund.

MEDIA RELEASE posted by Five Star Magazine & Media. You too can post media releases (aka press releases) here. For more information, email us.