Media Release: The National Theatre of Scotland celebrates its one millionth audience member 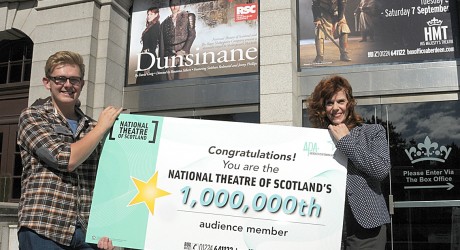 The National Theatre of Scotland has a special theatre without walls model and tirelessly tours across Scotland and beyond throughout the year. To date, the company has taken out on the road, 200 productions to 174 unique locations, across the globe and visited 124 communities within Scotland. The company has toured from Lerwick to Los Angeles, from the Borders to Beijing.

Stephen Will, a member of Aberdeen Performing Arts Youth Theatre has been identified as our millionth audience member. Stephen is part of a group booking to see the National Theatre of Scotland and Royal Shakespeare Company’s production of Dunsinane which is currently touring the UK. It opens at His Majesty’s Theatre, Aberdeen on Tuesday 3 September.

Stephen Will was presented with a celebratory ticket at HMT Box Office by Siobhan Redmond, who is playing Gruach in Dunsinane, on Tuesday 3 September.

Stephen is 17 years-old and is a new recruit to the youth theatre. He is a pupil at Alford Academy and has recently returned from a theatre exchange trip to the US where he worked with the American Conservatory Theater in San Francisco.

To mark this millionth moment, a member of the youth theatre is being given the opportunity by the National Theatre of Scotland to travel to London with their family to see the Company’s production of Let The Right One In at the Royal Court Theatre in December 2013.

As well as this prize, the National Theatre of Scotland will be launching the Big 100 ticket giveaway to audiences across the UK, offering people the chance to win pairs of tickets to see either Dunsinane, touring to Glasgow, Edinburgh, Birmingham, Oxford and Bath or A Little Bird Blown Off Course, currently touring the Highlands.

“Audiences are the life-blood of what we do as a Company. I am currently enjoying the challenge of developing and producing a programme, of new work for the Scottish stage, to excite and enthral our existing audience base, whilst hoping to reach a new one.

“It is testament to the world-class artists we have the privilege of working with that that our work has proved as popular, beyond Scottish borders, in the UK and internationally, as it has at home.”