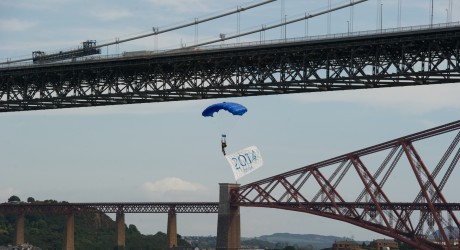 THE Forth Road Bridge is 49 years young and counting – and the stage is set for the first Forth Bridges Festival which will celebrate not just the 50th birthday, but also three centuries of world-class bridge engineering on the Forth.

A key event in the Homecoming Scotland 2014 calendar, the ten-day festival will take place from 4 – 13 September 2014 across both North and South Queensferry.

Organised in partnership by the Forth Estuary Transport Authority and Queensferry Ambition, the confirmed programme highlights include a boat flotilla on the Forth; a torch light procession over the Bridge; the Forth Bridge House Party, including a Birthday Parade; and Scotland Welcomes the World to Lunch.

Together, the Forth Road Bridge and the adjacent Forth Bridge are icons of Scotland and present a powerful visual image that is recognised the world over.

The festival is designed to appeal to residents and visitors alike, bringing a mix of Scottish pride and important economic benefits from tourism, in what is set to be a momentous year for Scotland.

Tony Martin, vice-convener of the Forth Estuary Transport Authority, said: “Since 1964, the bridge has made a real difference to the lives of Scottish people.

“It is a genuine success story, carrying over twice the weight and volume of traffic that it was originally designed for, and providing a valuable transport link used by 25 million vehicles a year. It’s fantastic to take the opportunity to celebrate this golden milestone with a real party atmosphere that everyone can take part in.”

An unique facet of the 50th birthday will be the Tower Top Trips, giving members of the public a rare opportunity to apply for one of 2014 strictly limited tickets to ascend one of the Forth Road Bridge towers.

Details on the release of tickets for this breathtaking experience will be announced later this month.

“The festival really does have something for everyone – business; the wider community and of course for the thousands of visitors who will help make this a really special time.

“The programme of events makes full use of our surroundings both on land and water and will help ensure a real feelgood factor for the area. I am particularly excited about ‘Scotland Welcomes the World to Lunch’, when we will attempt to set a new Guinness World Record for the largest sit-down outdoor lunch. Scottish hospitality at its very best!”

Welcoming the Festival, Mike Cantlay, chair of VisitScotland, said: “The Forth Bridges Festival is one of the signature events of Homecoming 2014 and is going to be truly spectacular.

“The Forth Bridges hold such a warm place in many Scots’ hearts, whether it’s commuting over the road or rail bridge on a daily basis, capturing the stunning silhouettes on camera come rain or shine or as the first glimpse of ‘home’ when flying into Edinburgh Airport.

“In this special 50th birthday year for the Forth Bridge, what better way to celebrate all that they mean to Scotland.

“We look forward to all the activities planned.  The Forth Bridges Festival will be a landmark event in the year that Scotland Welcomes the World – the magnificent year that is 2014!”

Tourism Minister, Fergus Ewing, said: “The Forth Bridges Festival will spotlight one of Scotland’s most iconic heritage sites and celebrate three centuries of world-class engineering.

“The event is at the heart of Homecoming Scotland 2014 and will position Scotland on the international stage as a dynamic and creative nation, extending the benefits and opportunities offered by the Commonwealth Games and Ryder Cup by celebrating some of Scotland’s greatest assets.”

The Forth Bridges Festival is funded by the Forth Estuary Transport Authority, Queensferry Ambition, Homecoming Scotland 2014, Heritage Lottery Fund and the City of Edinburgh and Fife Councils.

Further information and full programme details are available at www.forthbridgesfestival.com

MEDIA RELEASE posted by CM Porter Novelli. You too can post media releases (aka press releases) here. For more information, email us.