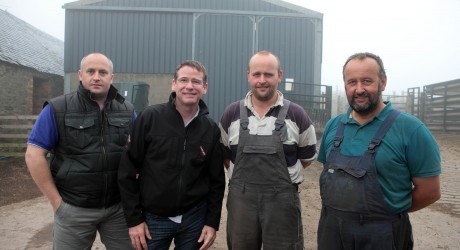 A PERTHSHIRE farming family is helping to improve the understanding of chefs around the country about the care and hard work involved in the production of top quality Scotch Lamb.

The Ritchie family who farm Montalt, an upland farm at Path of Condie, Perthshire have been working with Quality Meat Scotland (QMS) on the project which has seen them open their farm gates to take part in the first of a series of features aimed at bringing chefs closer to producers.

The case study style features, which will appear on a leading chef website – The Staff Canteen – include interviews with farmers aimed at inspiring chefs by improving their understanding of the care and pride farmers take in producing top quality Scotch Lamb.

Margaret Stewart, QMS marketing manager, said the video project is aimed primarily at young chefs who aspire to reach the top of their trade.

“The message we hope this project will help to convey is that if you want to produce the best dishes you must use the best products and understand how they are produced before they reach the kitchen,” said Mrs Stewart.

“The more a chef understands about a product’s unique characteristics – and these stem from the primary producer – the better he will be able to use it.”

The Ritchie family first took over Montalt in 1926 when George’s father, a ploughman working on farms in the nearby Bridge of Earn area, took on the tenancy before buying it outright for just £200.

“We’re working in a global market with lots of sheep meat being produced all over the world,” said John Ritchie who runs Montalt with his father, George.

“For us to make a niche and stand out, we’ve got to go that extra mile so that we can say everything we produce is to a standard that no one else is really producing at the moment.”

The farm includes 750 acres of land comprising 250 acres of good pasture, 370 acres of rough grazing, 100 acres laid over for hay and silage and 30 acres for swedes to help fatten the lambs over the winter.

This land supports 580 breeding ewes, three quarters of which are Scottish mules and a quarter Texel cross mules which jointly produce around 950 to 1,000 lambs a year.

“The Scottish mules are very prolific,” said Mr Ritchie. “From every ewe we get 1.7 lambs. The Texel cross mules give a real butcher’s quality lamb with a bit more meat on the carcass and they work very well off a grass-feed system.”

The sheep are also well suited to the terrain which sits at between 250-300 metres above sea level.

The farm insight features being produced by QMS are being complemented by features showing top chefs demonstrating dishes using Scotch Lamb, including Andrew Fairlie at Gleneagles and his head chef Stevie McLaughlin.