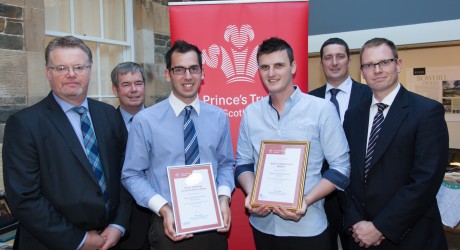 The 29 year-old founder of Daily Essentials Direct in Tweedale was announced regional winner at a ceremony at Bowhill Little Theatre in Selkirk last night.

He was presented with a £1,000 cash prize by Stephen Pringle, finance director for Buccleuch Energy, sponsors of the winner’s award.

Daily Essentials Direct was set up by David Scullion in 2010 to deliver breakfast items, groceries, newspapers and other provisions direct to the customer. This provided customers with a competitive and affordable alternative to driving to the shop everyday to pick up a few items that could be delivered straight to their door.

In the second year of trading, the young entrepreneur decided to introduce a milk only delivery service. By doing this, he was able to reduce prices for his customers which had the result of expanding his business, adding a further 150 customers including commercial clients.

At the start of this year, David opened up a shop and now has a supply agreement with a local dairy, which means he now delivers milk to over 450 customers.

The young musician started playing the accordion at 14 years of age completing his Level 2 and Level 3 exams during this period.

Three years ago, he started to get bookings to play and decided to start his own business, specialising in Scottish Dance music for ceilidhs, weddings, anniversaries and charity events.

Ewan Galloway who is from Coldingham, approached PTYBS and received a loan so he could produce his first CD, titled Perfect Timing.

In 2011, he introduced a ceilidh and disco package, which proved enormously successful.

Earlier this year, Ewan’s band participated in BBC Scotland’s Take the Floor, and he has since started to learn to play for Scottish Country Dancing, which should open up additional opportunities for his band including touring abroad within the Commonwealth countries.

The young entrepreneur is currently working on his fourth ‘live’ CD and is due to start a recording course at Edinburgh College which will enable him to record CDs for both himself and other bands, thus adding a further string to his bow.

Speaking at the awards ceremony, Prince’s Trust Youth Business Scotland regional manager, Tara Bolland, said: “Both these young entrepreneurs have exemplified determination, the will to succeed and the ability to turn a good idea into a viable business. They are great role models for other young people and deserving winners of these awards.”

Stephen Pringle, of Buccleuch, added “We are delighted to celebrate the determination and innovation of our young people by recognising and rewarding their achievements through these awards.”

About The Prince’s Trust

Youth charity The Prince’s Trust helps disadvantaged young people to get their lives on track. It supports 13 to 30 year-olds who are unemployed and those struggling at school and at risk of exclusion.

Many of the young people helped by The Prince’s Trust are in or leaving care, facing issues such as homelessness or mental health problems, or they have been in trouble with the law.

The Trust’s programmes give vulnerable young people the practical and financial support needed to stabilise their lives, helping develop self-esteem and skills for work.

Three in four young people supported by The Prince’s Trust move into work, education or training.