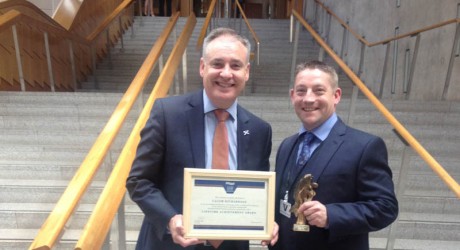 THE owner of an award winning North-east chip shop has been rewarded for his commitment to educating people about the seafood industry.

Calum Richardson, owner of The Bay Fish and Chips in Stonehaven, Aberdeenshire – which was crowned the UK’s No1 Fish and Chip shop earlier this year – was presented with the Scottish Seafood Training Association (SSTA) Lifetime Achievement Award at the Scottish Parliament last week (Thursday 5 September).

Cabinet secretary for Environmental and Rural Affairs, Richard Lochhead, MSP, presented Mr Richardson with his award in recognition of his outstanding commitment to promoting the fishing industry onshore, and endorsing the benefits of staff training.

The Bay, is run by Mr Richardson and his wife Lindsay, who both share a drive and focus for the seafood industry, promoting sustainability, local produce and the environment.

Mr Richardson encourages staff development and progression through training at the award winning shop, and all team members are trained in MSC so they have a clear understanding of traceability from sea to plate and can pass their knowledge onto customers.

He is also an assessor for Seafish and National Federation of Fish Friers (NFFF).

Robert Milne, chair of the SSTA, said: “Calum received his award in recognition of his fantastic ambassadorial achievements in promoting the fishing industry both ashore and afloat, and for his commitment to demonstrating the benefits of staff training to his peers.

“On behalf of SSTA, I extend my sincere congratulations to him.”

Owner of The Bay, Calum Richardson, said: “It is a great honour to be presented with this award. Staff training is extremely important at The Bay and we strive to ensure we provide top class customer service.

“The award is a great accreditation for the business and its team.”

The multi award-winning business has been highly recognised over the last year and has received many accolades for its commitment to sustainability and the environment.

The Bay has a three-star rating from the Sustainable Restaurant Association (SRA) placing them as one of the highest rated restaurants in the UK.

The Bay was the first fish and chip shop to achieve an MSC Chain of Custody for North Sea Haddock, ensuring full traceability of all the haddock suppers from sea to plate.