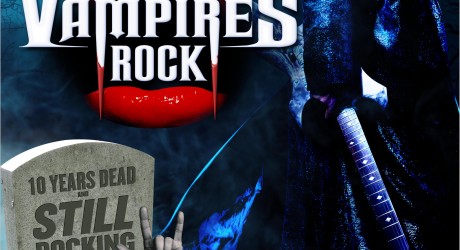 LONG before the world became obsessed with the likes of Twilight and True Blood, hit musical, Vampires Rock, paved the way for all things supernatural.

Opening its doors for the first time back in October 2003 at the Majestic Theatre Retford, Vampires Rock has become one of the most successful touring theatre shows in the UK today, playing to sell-out crowds year on year.

The baron is on the look-out for a new bride when along comes Pandora, a naive and geeky young singer looking to audition for a place in the club’s resident rock back.

Cue lots of comedy, fantastic costumes and a fair amount of fake blood as the baron attempts to teach Pandora the ways of ‘Rock’.

And of course the tale is told through a whole horde of Rock Anthems known and loved by all ages – hits by acts such as Guns n Roses, Bon Jovi, AC/DC, Meat Loaf, Queen and many more – and that’s one of the reasons the show is so popular with fans.

“The problem with a lot of musicals is that you have to see them a few times before you know the songs and can sing along, but the singing along is the fun part.

“I wanted to create something where you could come to the show and be part of it from the very first time,” says Vampires Rock creator and star, Steve Steinman.

The show has gone from strength to strength over the years with Steinman keen to add things to keep the fans coming back.

“When we started out the show was great but it was a bit smaller than it is now, over the years we’ve added more dancers, more costumes, more pyrotechnics, we’ve introduced fire dancing and we recently added a silk dancing routine as well.

“And we always keep the tours fresh by changing some of the songs that feature, of course there’s some that’ll never be missed out – I don’t think we’d ever get away with not doing Bat Out of Hell, the fans wouldn’t stand for that!”

In 2005, the show embarked on its first arena tour.

With over a million ticket sales to date the show doesn’t look like it’s going to stop just yet.

Steinman has been active on social media from the get go, inviting fans to suggest what songs they would like to see in the show and even what venues they want it to play.

“I wouldn’t say Vampires Rock is a cult, but once you’ve been to see it you keep coming back – there’s definitely a Vampires Rock Family – there are people that travel all over to see us, there’s even people with Baron Von Rockula and Pandora tattoos – that’s the level of commitment the fans have.”

The show has attracted some famous names in its time on tour too, in 2007 Eddie Ojeda of hit rock band, Twisted Sister, played guitar in the show, and he was followed by Toyah Wilcox, who toured in the show for two years as the Devil Queen, the long-suffering wife of Baron Von Rockula.

Steinman says: “Toyah wanted to be in the show but there wasn’t a suitable character for her to play so we wrote one specially.

“Toyah was great; she introduced the show to a new audience. I remember in one of our first meetings we  were discussing what type of costumes we would design for her and she said ‘Oh don’t worry darling, I’ve got the perfect thing in my wardrobe already’ – that was Toyah, she was made to be in a show like this!”

So with ten year’s past what does the future hold for Vampires Rock? “Well since we started the show the brand has grown, we have a Vampires Rock clothing line and now even a Vampires Rock Motocross team, but it’s always been about the music and as long as the fans keep coming back we’ll be on the road.

We’ve got a 50-date tour about to start and there’ll be a huge Halloween party at the 1,200-seater Ipswich Regent theatre which is not to be missed!”

Eden Court is the only theatre in Scotland to offer Scottish Qualifications Authority (SQA) courses in Drama and Dance.

These are extracurricular courses, which offer pupils from across Highland the opportunity to study at Eden Court for an SQA Higher Dance, Drama or Intermediate 2 exams. Aside from Eden Court, there is only one school in the Highlands where pupils can sit SQA Higher Drama exams.